Food Network fans will probably recognize the name Seoul Sausage even if they’ve never been to the small West Los Angeles eatery. The brand got fantastic exposure by winning Season 3 of The Great Food Truck Race. That particular season was for competitors who didn’t currently have a food truck and were fighting to win one. Seoul Sausage was an LA catering company whose first store was under construction and had not yet opened, so the timing was perfect for promoting the concept and getting on the show. The inexpensive and delicious Korean-inspired fare won fans everywhere the show traveled. The brick and Mortar Seoul Sausage opened after the show wrapped and KBBQ lovers can head there to taste some Korean fusion without having to chase a truck down on twitter.

We’d been meaning to check out Seoul Sausage for ages, but never got around to stopping in until recently. The menu is short and sweet, and everything sounds tasty. We spit a few things to get an idea of what their fare was about. We started with a spicy pork sausage, which is stuffed with Korean BBQ pork filling and topped with apple cabbage coleslaw on a toasted roll. 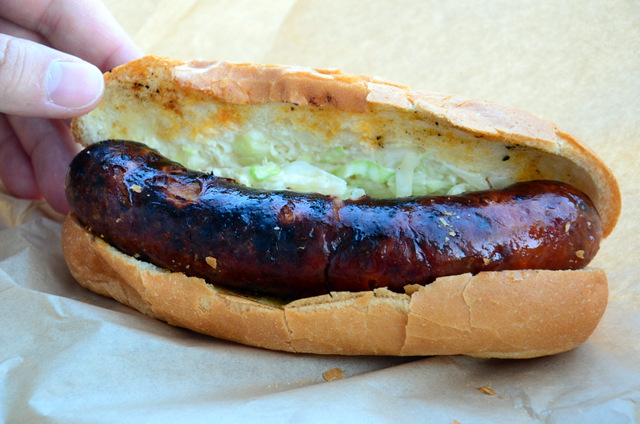 How could you not order something called the Flaming Ball? This arrancini-style ball was cheesy and filled with pork and kim-chi fried rice. It was served with a size of DMZ, a fantastic garlic jalapeno kimchi siracha aioli that we would put on just about anything. The balls were great, too, and reminded us of kimchi fried rice meets mac n’ cheese. 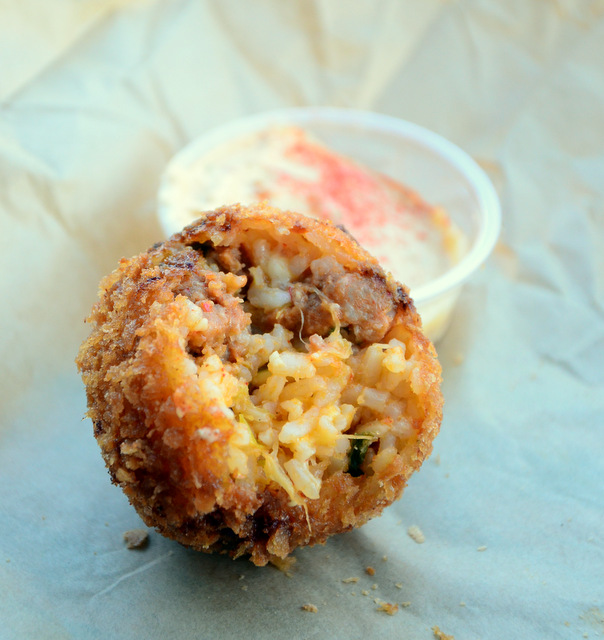 Our final dish was the Galbi Poutine, one of the most popular dishes on SS’s yelp page. This take on poutine tops crispy french fries with slow-braised short ribs, cheese, kim-chi pickled onions and avocado lime crema. This was a delicious twist on classic poutine, though we did miss the squeaky cheese curds that are usually included with any type of poutine dish. It was messy and it was worth it. The pickled onions were particularly good and contrasted really well with the rich meat.

Overall, Seoul Sausage is a good place to grab a snack and we’ll go back for the balls and the poutine if we’re in the neighborhood. The namesake sausage was actually our least favorite thing – not because it wasn’t tasty, but because it seemed a little incomplete to us. The homemade sausage had a good flavor and a nice “snap” when you bit into it, but it was very dry. The coleslaw didn’t add enough moisture to the huge sausage, though it was a pleasantly sweet flavor contrast. That said, there was an easy fix: get an extra side of the spicy kimchi siracha aioli that is served with the Flaming Ball and slather it into the sausage. It’ll add some heat, some moisture and bring a few new layers of flavor to the dog and make for a really delicious dish that is well worth stopping in to try.

King’s Hawaiian, Torrance, CA
Rob and I are huge fans of Hawaiian food, but…

Breakfast at bills, Honolulu, HI
The first time I ate at bills, it was more…