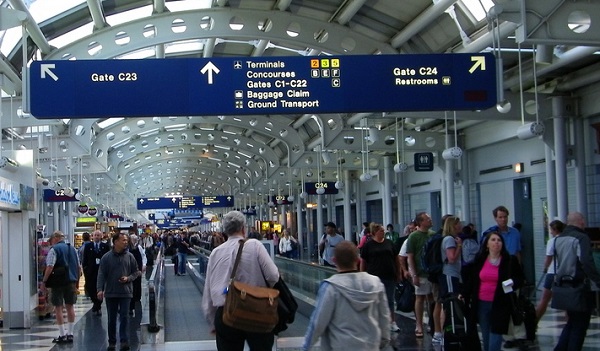 When flights are delayed or cancelled because of bad weather – both for snow in the winter and storms in the summer – it can be hard to get to where you want to go. Often, the airlines will try to reroute you so that you remain relatively happy and will come back for another flight in the future. Unfortunately, these attempts at rerouting can take you through multiple airports, far out of your way and leave you with still more delays. A little bit of planning on your part will get you home (or away) faster and more easily than whatever complicated route the airline’s computer spits out. We prefer to make plans ourselves instead of letting the computer pick for us, and it usually works out perfectly.

Once, when Rob and I were stuck in Chicago with a plane that was “indefinitely delayed,” due first to maintenance issues and then to weather delays, we spent a lot of time on the phone with the airline’s customer service trying to get onto another flight back to LA. Everyone on the flight was trying to get rerouted, in fact. No one wants to sit around knowing that they are, most likely, not going to make their flight. The next direct flight to LA was more than 8 hours after our original departure time and it was the only other one leaving on that airline that night. The customer service rep offered us seats on that later flight – with no guarantees that it would not be delayed – and on flights departed sooner but skipped around the Midwest and the South before finally turning towards the west coast. I didn’t want to fly to Minneapolis or Atlanta before flying to LA.

I got off the phone and we seriously considered our options.

I found a departing flight chart and looked at our options. I noticed that the flights to Las Vegas were not delayed. Las Vegas is a lot closer to LA than Chicago and much less susceptible to weather delays. I knew that we could easily get a flight home from Las Vegas, even if we had to go on another carrier, and when we were looking at an 8+ hour wait for a new flight, it even seemed like it might be faster to rent a car in Vegas and drive home if we had to.

I called the airline back and got moved onto a Las Vegas flight, and from there on to LA. I don’t know why the computer didn’t offer that as an option at any point, but even the operator acknowledged that it made a lot of sense. We were able to get on the next flight to Vegas out of Chicago just an hour later and we didn’t even have to drive home from Vegas after we landed.

So you need to be smart when your flight is delayed and take stock of your situation. Are all the flights delayed? How soon do you need to be home? Look for a route that makes sense to you and aim for that – don’t just wait around keeping your fingers crossed that the original plane will magically get back on schedule and don’t accept a route that takes you 12 hours out of your way. And be polite to the airline staff and customer service reps, because no one wants to go out of their way to help a jerk – and if you are nice and the last caller was a jerk, you are going to be that much more likely to end up where you need to be on time.