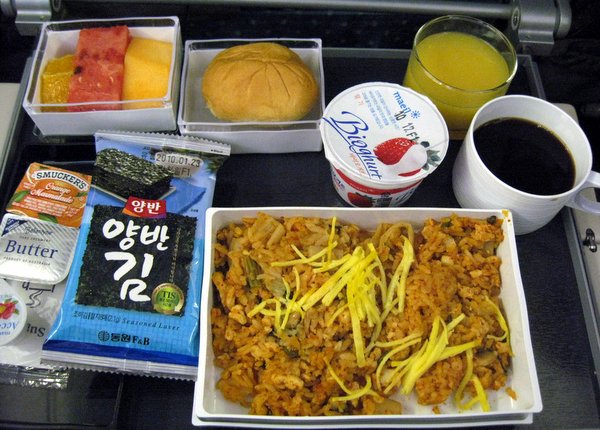 No one looks forward to eating airplane food. Even if you’re traveling in first class, it’s still not going to be the same quality that you would find at an earthbound restaurant serving the same dishes, though it is always considerably better than the meager offerings that you’ll find in the back of the plane. It turns out that one of the reasons that airplane food tastes so bad is that it is being eaten in an airplane flying at high altitude. A study by Lufthansa Airlines revealed that “dry air and pressure change in an airplane cabin reduce passengers’ perceptions of sweet and salty flavors by about 30 percent.” The effect of being in a plane is similar to having a cold with a stuffy nose, and everything tastes more muted. That means that liberally spiced and seasoned food eaten at ground level may taste much less assertive when eaten at 35,000 ft. It also means that bad to mediocre food is going to taste significantly worse while you’re in flight.

The science behind this study is like accurate, but it could easily be looked at as an excuse for why airline food tastes so bad. Packaged food eaten on airlines – take the Haagen-Dazs ice cream we had on Air France, for instance – still tastes very good. Does it taste quite as good as a similar product on the ground? It’s hard to say for sure, but you can bet that no one is pushing away containers of high quality ice cream or salty chips and saying that they taste funny.

This also reminds us of some of the best airplane food we’ve had, traveling to and from South Korea on Singapore Airlines (pi, when we were served dishes that were spicy and generously seasoned with kimchi and peppers. We’ve had some satisfactory curry sauces on airplanes, too, believe it or not. Adding a lot of spice help wake up your pressurized tastebuds. Leaving food bland and boring only handicaps it, so it has no chance of bring anything more than something to push around your plate.

Will My Flight Have WiFi?
WiFi access is becoming the standard on airplanes, meaning that…