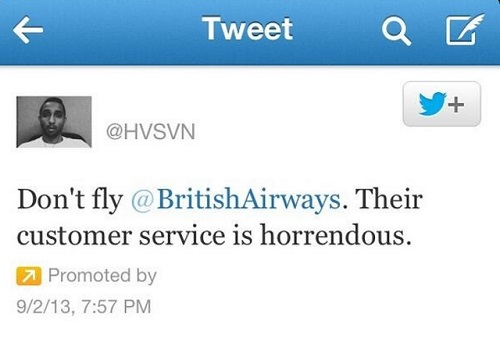 Losing luggage is frustrating. You never know if or when the bag will resurface. All you can do is check in with the airline a few times and keep your fingers crossed. It is especially frustrating if you feel like the airline is ignoring you or giving you the runaround – instead of actually trying to track down your lost bag. One British Airlines passenger found his revenge on social media, when he wasn’t getting any satisfaction from the airline.

British Airlines lost passenger Hasan Syed’s father’s luggage and apparently failed to respond in a helpful manner when Syed tried to have them track the bags down. So Syed purchased a promoted tweet and ran it in New York and London markets to shame the company and, hopefully, prompt them to put some effort into tracking down the missing luggage. He spent $1000 on the ad (pictured above) , and it was seen by more than 76,000 people in less than 24 hours as a promoted tweet and by even more who checked in on his feed as the word spread.

And the results? Arguments on Twitter with British Airways and, eventually, an apology from the airline and a report that the lost bag was recovered and en-route to its owner. Syed said he wasn’t and isn’t interested in compensation from the airline, just wanted to point out the bad customer service and one possible way that customers can take action.

New “saddle” seats on airplanes?
It may be standing room only on some airplanes in…
Airlines impose new fees for summer travel
Summer is generally considered to be the peak travel season.…

Nic enters Jauntaroo’s Chief World Explorer Campaign!
Traveling is one of the best applications of your time.…