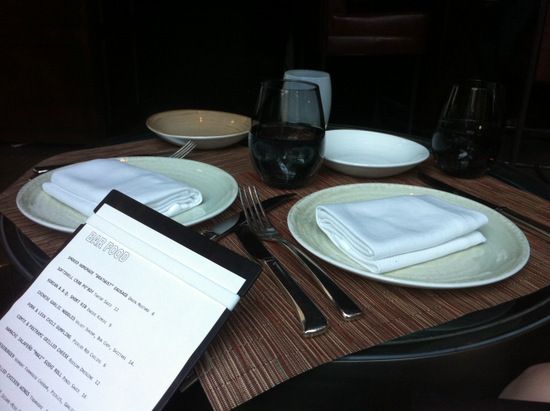 Spago is a Los Angeles institution that is the kind of place you go for special occasions, business meetings and to see – and try to be seen – by celebrities, judging by the crowd that strolls through its doors every night. There has always been a very high standard of food there, and for a restaurant that has been open for more than 30 years that is truly saying something. The restaurant recently underwent an extensive renovation to revamp the dining room and add a little more modern touch to the menu. Spago is the kind of institution where people don’t usually like to see much change, but the reception has been overwhelmingly positive. We were eager to try out the new Spago, which has a little bit more of a formal touch to it than it did before, and the new bar menu was the perfect excuse.

The bar menu as the name suggests, is only served in the bar of the restaurant. The specialize in craft cocktails and small plates that are perfect for sharing – and eating in the bar is quite a bit less expensive than eating in the main dining room. It’s less formal, too, and there are plenty of seats both at the bar and at small tables. We came in when they opened for dinner and snagged one right by the window in an effort to get a little more light on our food. 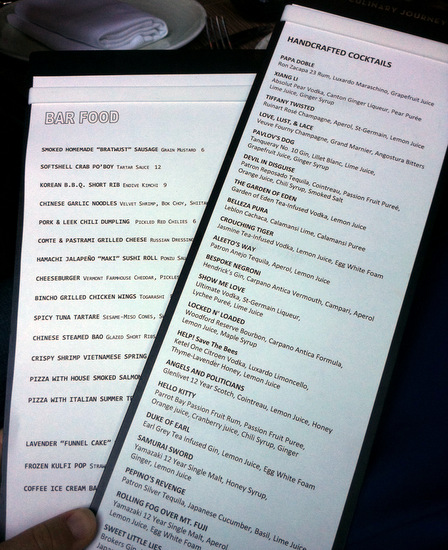 We started off with cocktails. The specialty cocktail is full of tempting looking drinks and we had a hard time deciding. I tend to like anything with passion fruit, so I went with the Hello Kitty. Rob stuck with the Japanese theme and ordered a Samauri Sword. These were easily, easily some of the best cocktails that we have had in a long time. The Hello Kitty – Parrot Bay Passion Fruit Rum, passion fruit puree, orange juice, cranberry juice, chili syrup and ginger – had a tart tang to it and a subtle heat from the chili and ginger. Well-balanced, and not as sweet as you would expect from the name. The ultra-smooth Samurai Sword was made with Yamazaki 12 Year Single Malt, honey syrup, ginger and lemon juice, finished with a gigantic chunk of ice to keep it cool without watering it down. They were pricey – $18 each – but honestly tasted like they should have cost that much. That being said, we probably would have had another round if they had been a few dollars less! 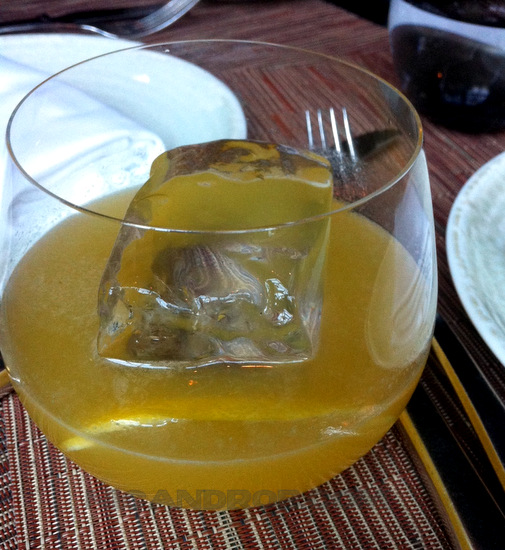 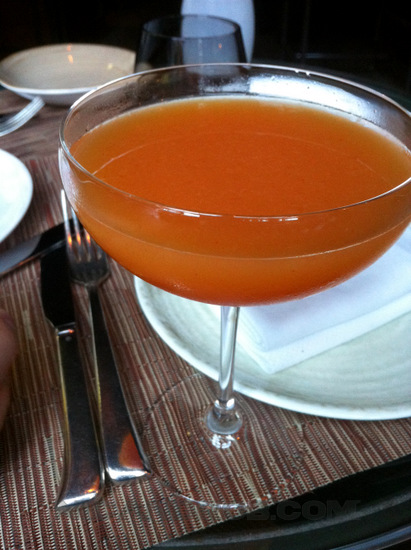 With drinks in hand, we turned our attention to the food. The menu has a distinctly Asian flair to it and a mix of Chinese, Japanese and Korean influences, although there is a classic American cheeseburger and Spago’s signature smoked salmon pizza is still an option for those who are looking for a little of the “old” Spago on the menu. We were tempted by the pizza because it is a classic, but everything sounded delicious and we went with all new dishes.

A server (the service was excellent) came by and set the table for us since we were eating in the bar.

We started with the Comte and Pastrami Grilled Cheese Sandwich. Fantastic flavors, ultra-tender meat that is cured in-house and could stand up to the pastrami at some of the delis around town if they piled it up high. It was a bit smaller than we would have liked and seemed like it should have had six little wedges for the size of the plate, but very addictive.

We moved onto more Asian-inspired dishes after the pastrami. A pair of Chinese Steamed Buns stuffed with glazed short ribs were our next choice. These were fantastic. The meat was incredibly tender and the glaze was just delicious. The soft and fluffy buns were spot-on, too. These also seemed a little heartier than the pastrami. 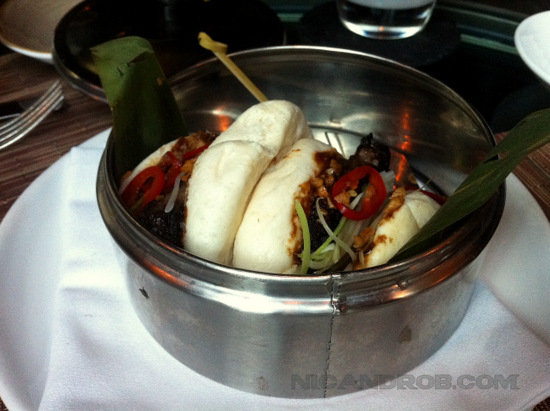 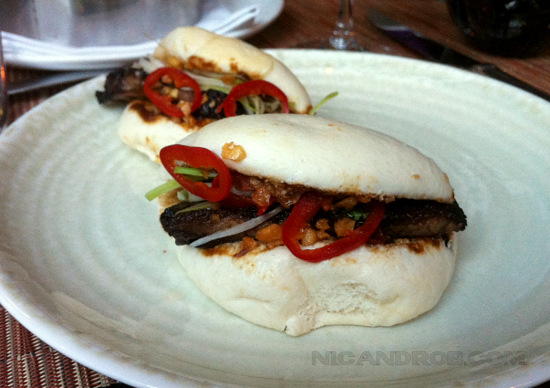 Next up was Pork and Leek Chili Dumplings with pickled red chilis. The dumpling skins were just right on these, with a nice crispness where they had been pan-fried. They were very meaty. And they were even better once our Korean BBQ Short Ribs came out, since that dish came with a sauce that was a perfect match for both the ribs and the dumplings. The ribs were flavorful and probably a little bit better quality than some of the ribs that we get at our regular Korean bbq joints, but we’re huge shortrib fans no matter what form they come in. 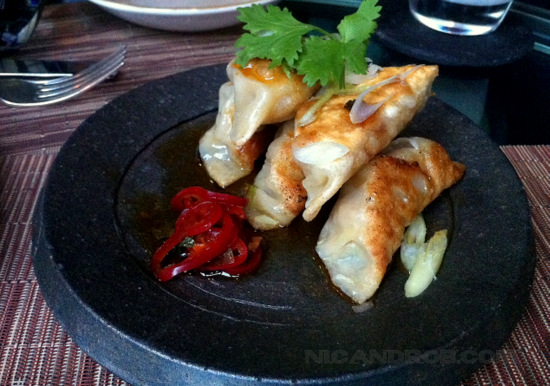 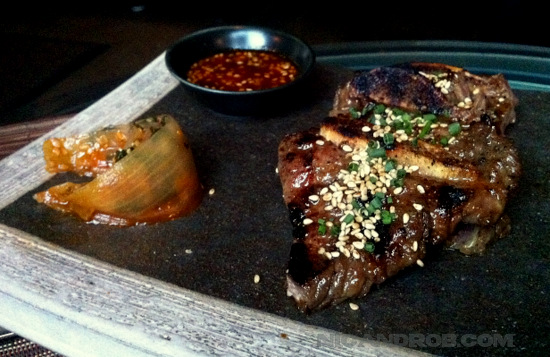 Four dishes is enough for two hungry people to split and be completely satisfied for dinner – and it’ll cost you less than eating in the main dining room. The menu is different, but the quality is just as good. Since we still had a little room after finishing our snacks, we opted to get a dessert ($6 each – definitely worth it) and picked the Coffee Ice Cream bars. This dessert had an adorable plating of two mini ice cream bars, probably 4-6 bites each. The dark chocolate-dipped bars were filled with coffee ice cream that was streaked with a smooth caramel sauce. They had a wonderful coffee flavor and were a welcome alternative to a regular cup of coffee after a meal. 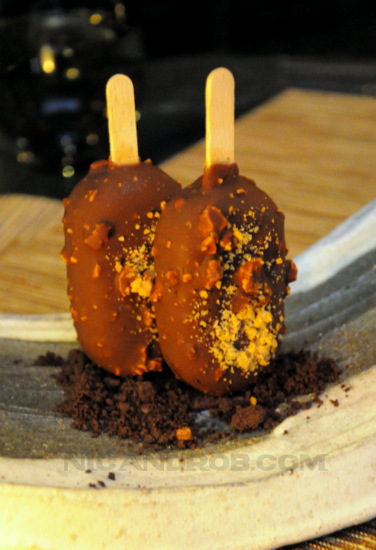 We left very happy with the experience – and we’ll definitely head back to the bar for dinner the next time we’re down in Beverly Hills without dinner plans. Or, we might just stop in for a quick snack on the way to a later dinner somewhere else just to whet our appetites.

Kenya Safari, Day 2
Day two of the safari started out a little rough.…