Father’s Office is a gastropub with a bit of history to it. It was founded in the 1950s as a neighborhood bar that served craft and locally brewed beers, which a little unusual for the time but carved out a place for it in the neighborhood and gave it staying power. Chef Sang Yoon – who has recently been seen on Top Chef Masters – bought the bar in 2000 and turned it from a bar into a gastropub, adding a signature burger to the menu that was named one of the best burgers in the world by Esquire magazine.

The original Father’s Office is still in the same location, but with lines out the door on most nights, it made sense to open a second location and Yoon did just that in Culver City at the Helms Bakery Building. We hadn’t been down to the new location (even though it is not so new anymore!) and since we were in the neighborhood and getting hungry, we didn’t hesitate to head in.

We split a burger and side, since the burger is very generously sized and we wanted to save some room to grab an ice cream from the Helms Bakery Truck, as well. The Office burger is made with a dry-aged beef patty and is topped with caramelized onions, Gruyère and Maytag cheeses, applewood-smoked bacon compote and arugula. The burger is served on soft roll, rather than a more traditional bun. The beef is juicy and very flavorful, and the onions and bacon turn it from tasty into addictive. The arugula adds a nice bit of peppery freshness to each bite and breaks up the richness of the beef. The bread may look like a little too much at first glance, but it soaks up all those juices without falling apart. 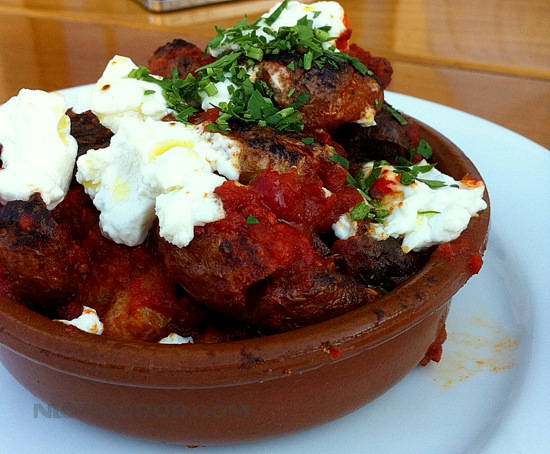 They’re also known for their fries, but we opted for Patatas Bravas instead, as we were curious to know how their version of this classic Spanish tapas dish was served. It is made with tiny heirloom potatoes that are roasted and tossed with a spicy chorizo sofrito and topped with tangy goat cheese. It is definitely not like anything we’ve eaten in Spain, but it was still delicious, with just the right amount of heat to it. A dish of the cheese and sauce would be fantastic with bread instead of potatoes, too.

One more thing that Father’s Office is known for is their hard-and-fast “no substitutions” policy. If you don’t like it or can’t eat it, don’t order it, because they won’t make changes, substitutions or omissions from their menu items. Also, since it is a bar, you must be 21 to enter.