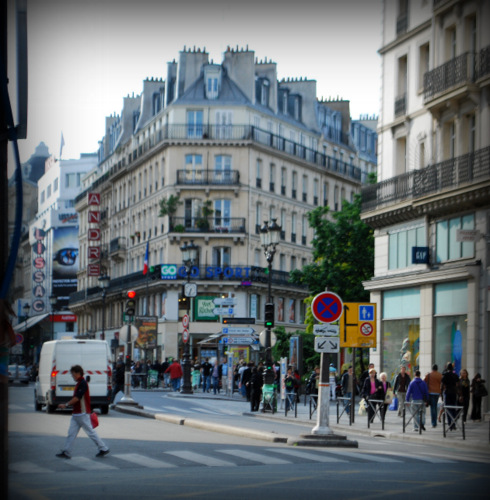 The first time we went to Paris, I did a lot of research before booking anything. It was our first big trip together and I wanted it to go smoothly. Hotels are expensive in Paris and it usually pays to look around for a rate that can save you 40 or 50 euros a night – money that could go towards dinners out and other traveling adventures! I knew that some of the cheaper hotels might be in less desirable arrondissements, but since I wasn’t that familiar with the details of each neighborhood at the time, I relied heavily on online reviews and the recommendations of friends to narrow down the area.

I finally settled on a hotel that was near a najor metro stop, a plaza with a large, historic arch and that seemed to be a short walk away from the heart of Paris. I looked up the name of the hotel on every travel site to check reviews and felt confident that it would be a winner. They had a great rate, too. I booked it.

When we landed in Paris, we picked up our bags and headed out of the airport by public transportation. We arrived at the square with the arch without any problems, and I figured that it would be easy to find the hotel with a big landmark like that next to it. Unfortunately, that wasn’t the case. The neighborhood did not look fantastic (the prostitutes with pimps loitering nearby were a major red flag) and lacked signage. I finally had to duck into a shop to ask the store owner in my rusty French for directions to the hotel. I was thrilled when he understood me – but less thrilled when he had no idea where the hotel was. After 15 frustrating minutes of wandering around the square with our luggage (looking like dorky Americans the whole time), we found it less than 100 yards away from the shop where I asked about it.

We headed inside and the desk clerk couldn’t find my reservation.

Inconceivable! I thought. I had checked that reservation a dozen times to make sure it went through! I had all my paperwork and knew we were at the correct hotel! Luckily, it didn’t take that long for the clerk to figure out the problem: there was a hotel about 60 km outside of Paris with the exact same name and that was where I had made my reservation. I did my research on this hotel and managed to book the other one. What a way to start a trip!

She was kind enough to call to cancel that reservation and get us a room for the night, although the assurance of “this happens all the time” didn’t make me feel any better. I was definitely thrown for a loop.

But we headed up to the room (which was nice but not nice enough for the rate) and I pulled myself together. I was not going to start the trip off on the wrong foot! We decided that we needed to find a different hotel with a better location if we were going to be paying more than we anticipated anyway. We headed out – armed with Rick Steve’s guidebook, since this was pre-iPhone traveling and we had no other way to look up another hotel – and walked up near the river. The first hotel in the guidebook we stopped in looked great, was less expensive than our hotel, had a fantastic location – and had a room for the next three nights. We booked it immediately and moved the next morning.

Kenya Safari, Day 3
The third day of our Kenya safari was a traveling…