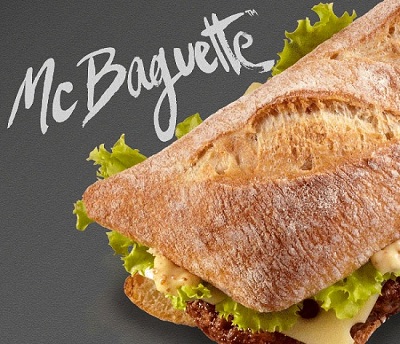 When I mentioned that we like to occasionally visit fast food joints when we travel and see what local spin they have put on their offerings, I didn’t expect to see one of these items in the news just days later! McDonald’s in France has launched a McBaguette sandwich - and that it is creating some controversy in Franch. The sandwich is their version of a traditional French baguette sandwich, a popular lunch option that is widely available at cafes, bakeries and other small shops in France. The traditional sandwich is simple and the basic ingredients are  meat, cheese and mustard – with a little lettuce or other greens added for color to some – served on a classic, long baguette. The McBaguette is made with ham, cheese and potato, topped with lettuce and mayonnaise.

Critics say that the McBaguette is taking business away from local bakeries and that they are co-opting the word ‘baguette’ when their bread is not truly a baguette shape. The more aggressive critics worry that the sandwich could threaten their very industry. But, since McDonald’s is able to co-exist with local businesses in most places, these extrame fears are probably unfounded. And the McBaguette has its supporters, including Chef Pierre Koffmann, who has held three Michelin stars, who say that it is tasty, fresh and generously topped compared to other versions of the sandwich. He notes, of course, that he would not take it over a baguette from a great bakery, but there are plenty of bakeries that aren’t turning out bread nearly as good as what McDonald’s has put onto this particular sandwich.

When we were in Paris, we had quite a few baguette sandwiches. Some were excellent. Others were downright bad. My feeling is that just because you can claim yours is “traditional” because you are French or your bread is technically a baguette in size and shape, doesn’t mean that your sandwich is any good. No one (except perhaps the occasional tourist) is going to choose a McBaguette over an outstanding baguette sandwich from a famous bakery – but it is like to be better and fresher than the cheap versions that convenience stores try to push to tourists. A little competition might even end up being a good thing, since it could very well raise the bar when it comes to taste – which would mean that our odds of having fantastic sandwiches the next time we’re in France are even better.

The gift of travel: Priceless
I don't think that you need a reason to travel…

Frustrated Flier Attacks Ticket Agent
Being stuck at the airport is stressful, but getting angry…