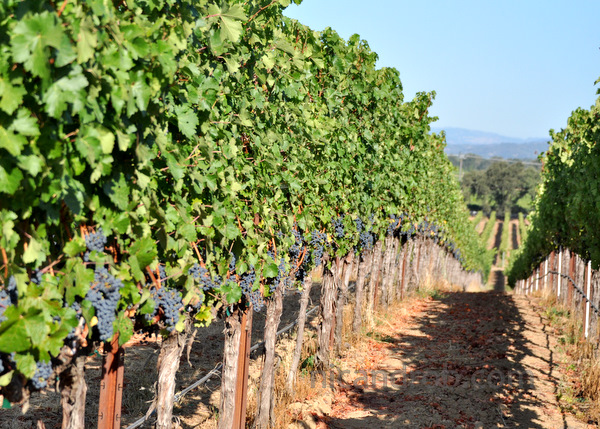 I was fortunate enough to be invited to Kendall Jackson’s Sip, Bite, Blog event this year, since members of the outstanding Kendall Jackson team happen to be fans of Baking Bites. The event included about a dozen bloggers, and we all traveled to Sonoma, California for a weekend of wine tasting and wine education. Looking back now, I should have brought Rob along with me (since we both love wine country), but there is always next year!

The Sonoma Valley is one of California’s most popular wine growing regions, and although it is certainly just as well known as the Napa Valley to those of us in California, it doesn’t have quite the name recognition that Napa generates outside of the state. Kendall Jackson is a family owned winery that owns property all over the state, but is headquartered in the Sonoma area. When I arrived at the Santa Rosa airport, I stopped by my hotel and then headed over to the Kendall Jackson Wine Center in Santa Rosa for the start of the event.

SBB was a three day long event, and although it is tempting for me to run through every bite of food that I ate and every single wine that I tasted, I’m just not going to do it. This is largely for the sake of readability, because with two (or more) tastings of multiple wines every day – some with food, some without – that is a lot of information to share. Instead, I’d like to simply review some of the highlights of the wine pairings, tastings, harvest tours, and the rest of the activities we had with head winemaker Randy Ullom and the rest of the Kendall Jackson team. I have posted even more photos on the Baking Bites facebook page, if you want to get some more details about the food I got to taste. 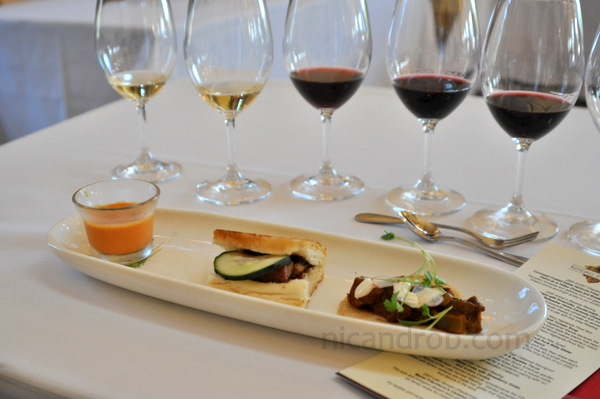 Our first tasting consisted of about seven wines with seven tapas-sized courses. The wines, across the board, were excellent. None were more delicious than the Late Harvest Riesling that they paired with the signature Double Gold Caramel Corn. This particular riesling tasted like liquid tarte tatin, buttery and sweet with an unmistakably sweet-tart apple quality to it that was irresistible. It was easily one of the most memorable wines I’ve ever tasted – and I noticed that it won over many people who claimed not to like sweet wines at all. 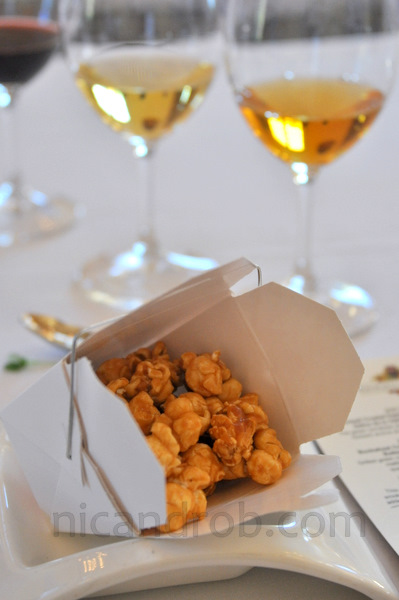 The wine tastings were typically hosted by Randy Ullom, the head winemaker Kendall Jackson, who was with us for most of the weekend. We tasted Kendall Jackson wines that were from the Sonoma area, rather than those from their properties elsewhere in the state. Many that we tasted were single-vineyard (as well as single-estate) wines, and it was amazing to see the dramatic differences in the character of the wines from vineyards that were so close to on another geographically even when they were the same variety of grape. 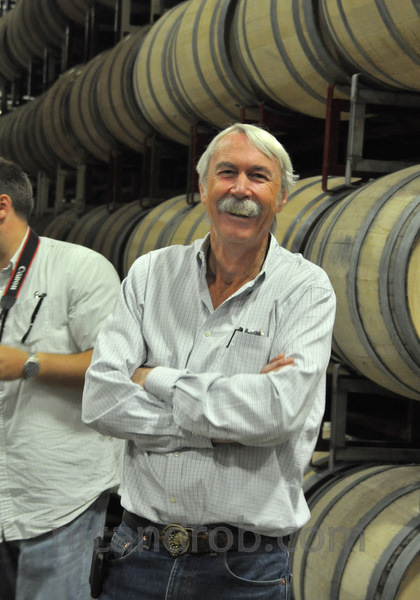 On our first full day, we visited Stonestreet Winery to see grapes being pressed and the juice being placed into barrels. The harvest had just started, due to a cool summer, and it was a flurry of activity as chardonnay grapes arrived by the truck load. The juice eventually made its way into custom made wine barrels to ferment. It was also interesting to me that many of the barrels were actually produced in the US with American oak, where many other wineries I’ve been to use specifically French oak barrels. 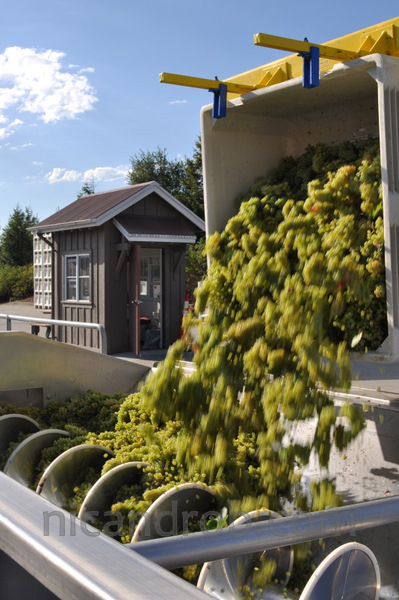 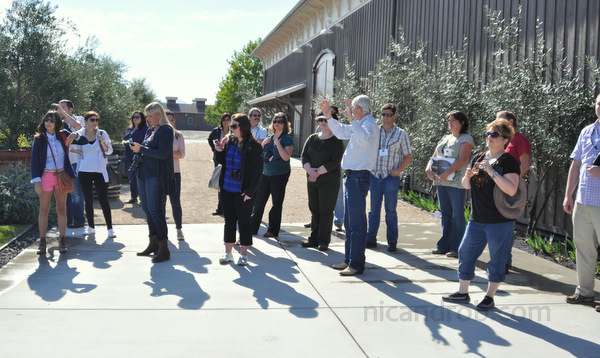 After getting a crash course in wine making and smelling some very young wines that were still in the barrels, our group got into some Land Rovers and headed up to what must be the most beautiful spot to taste wine anywhere in the world: The Overlook at Alexander Mountain Estate. This overlook was at the top of one the KJ vineyards highest points, and what made it even more special was that from this vantage point we could actually see most of the single-vineyard wines that we tasted there. Hawkeye Mountain and Piner Hills were my favorites of this bunch. 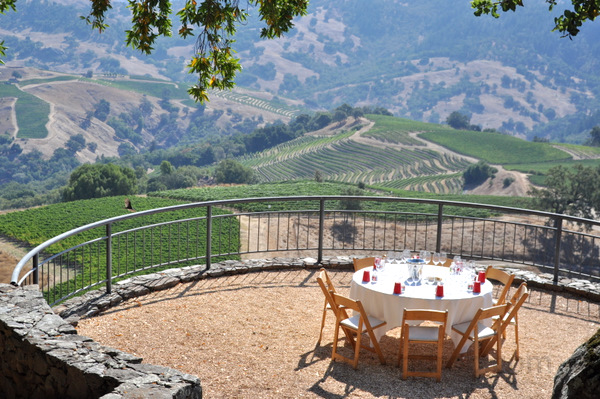 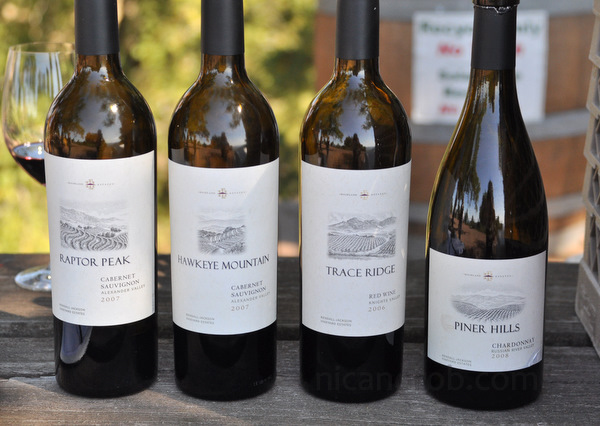 After our tasting, we headed into the vineyards to see the harvest in action. The vineyard manager, Tony Viramontes, oversaw the crew of expert grape pickers (some seasonal and some permanent employees) that were collecting chardonnay grapes that had just reached their peak. 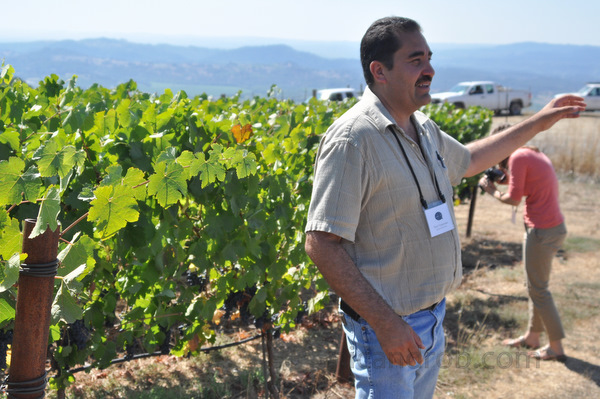 A small hook-shaped knife was used to slice bunches of grapes from the vines. The grapes were collected in small baskets and transferred to slightly larger bins at the top of the vineyard. Once the bins were full, they were rushed down to the winery to get crushed. Everything happened in fairly small quantities to ensure that the grapes arrived at the winery in top condition. I pitched in by sampling some of the overripe grapes (also know as raisins) that wouldn’t get accepted into this batch of wine. Delicious! 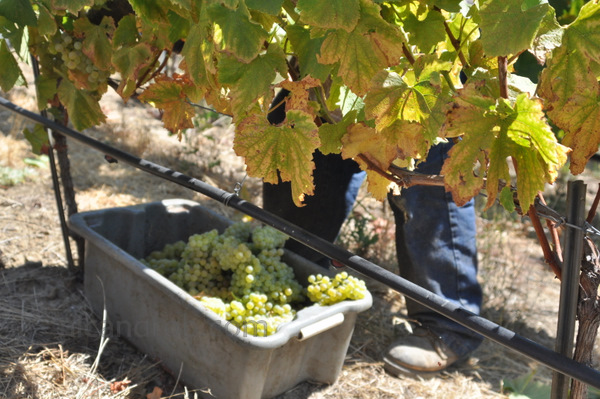 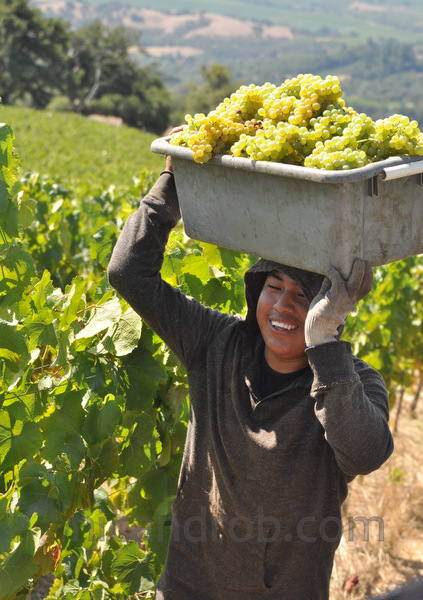 After the action of the harvest, it was time for another wine tasting. This was actually a wine education workshop where we worked on the theory that you could pair wine with foods – fruits and vegetables, specifically – simply by using color association. The theory was one I hadn’t heard before and I was extremely skeptical that white, yellow and green vegetables would automatically pair better with pinot noir than with chardonnay, which tends to favor orange and red colored foods, but just about everything we tasted (all fresh from the KJ gardens) matched up that way! I have also recreated a scaled-down version of this rainbow tasting at home and gotten consistent results. Purple and black vegetables, incidentally, lean towards cabernet sauvignon and other reds. 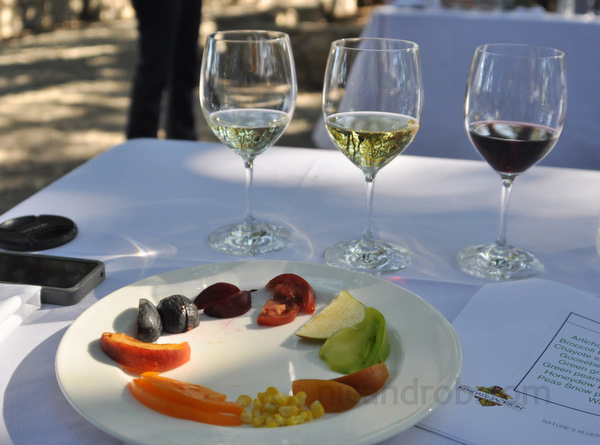 Dinner that second night took place at Matazanas Creek Winery, where we were treated to samples of all kinds of locally produced artisan goods, from goat cheese to oysters (which I am not a fan of, but other people loved). 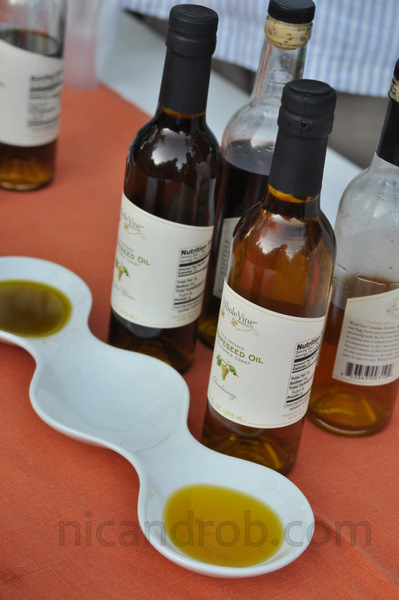 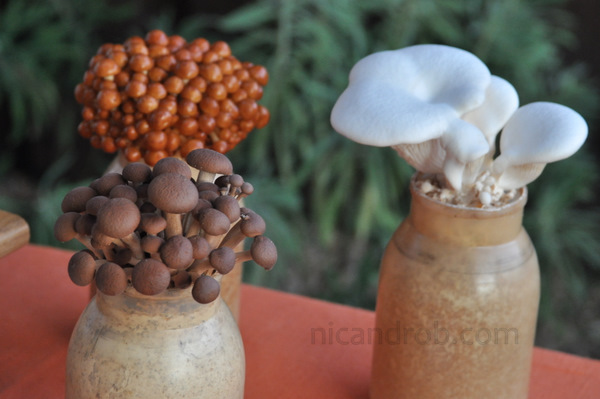 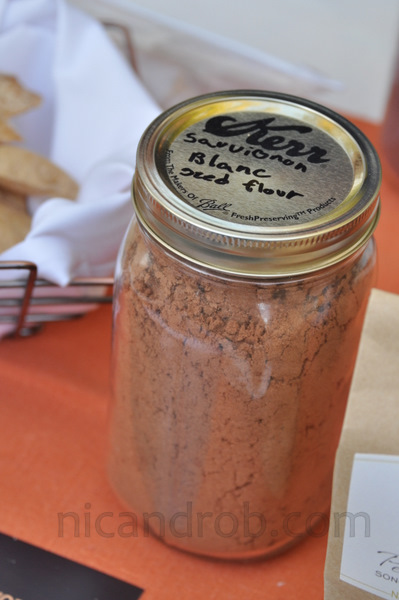 The third day took us to a food styling workshop at Arrowood Winery. I have to say that it was one of the few times I’ve styled food that someone else actually prepared for me – and it made it all the more fun. We tasted a few Arrowood wines at lunch, but this was a fun morning to give us a break before a big afternoon and evening. 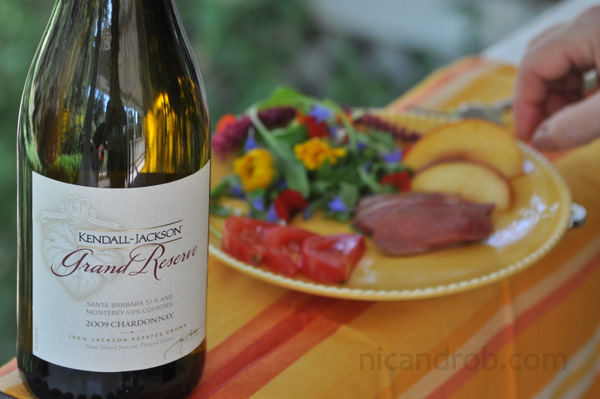 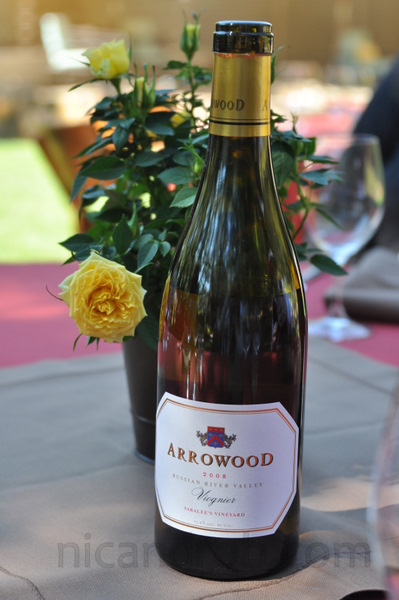 In the afternoon, we went back to Kendall Jackson’s Wine Center for a tour of the edible gardens they have there. Head Chef Matt Lowe was on hand to take us around. Not only do they grow their own produce for the food served in the Wine Center – for tastings and for banquets/events (meat is locally sourced, too) – but they have a garden that is divided up into the flavors that pair well with certain wines. It was like our rainbow tasting from the previous day on a massive scale and it was fantastic. Of course, we had some wine with us as we toured. 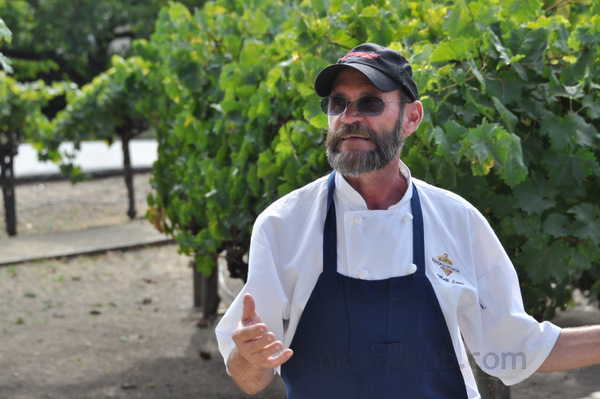 We also had food writer, restaurant critic and the former editor of Gourmet magazine Ruth Reichl join us at this point. She was warm and friendly, and impressed us all when it was clear that she was familiar with our blogs! She was also the guest speaker at the final dinner we enjoyed during SBB, funny and engaging with stories of how she got into food writing and learned to love food. 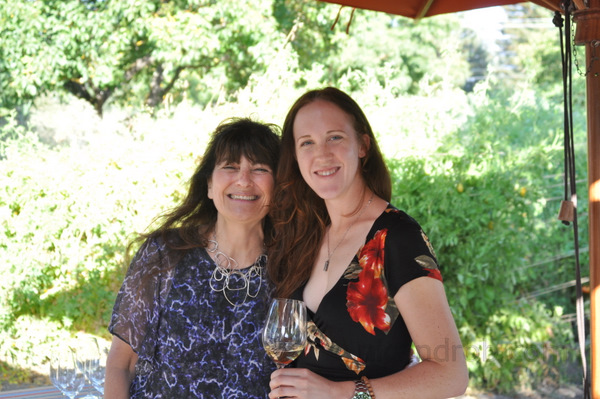 To say that the trip was wonderful would be a huge understatement, as I left with some new favorite wines and a whole new group of friends. I – and everyone that took part in SBB – was impressed with the passion for food and wine that everyone we met at KJ displayed, as well as with their dedication to making their wines, their production process and their company even better in the future.

Gravity 1020 at The Fort Collins Brewery, Fort Collins, CO
Visiting a brewery is a must-do when you're in Fort…
There are 2 comments for this article