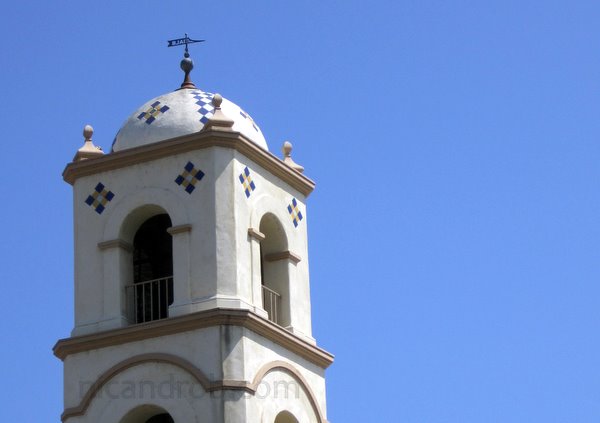 One day vacations are very underrated. All you need is a day that you and your significant other don’t have to work – whether it’s a weekend or a weekday – and the desire to go on vacation and you’re all set. There are dozens of places within an hour or so of Los Angeles that can make great one night getaways and Ojai is one of them. Rob and I were talking about how we’d like to take a short trip somewhere just for a mini break, a couple of nights, but we were having trouble scheduling it. That is when the idea of an overnight trip hit us and we booked a room at The Capri Hotel in Ojai, California.

Ojai is a small town that is famous for its well known population of artists, musicians and health enthusiasts and it has a lot of personality for a place with a population of about 8,000. It is also well known for the fact that the Ojai Valley Inn and Spa is located there. The Ojai Valley Inn has been consistently ranked as one of the best golf resorts (and spa getaways) in the country and consistently draws a big crowd. If you’re going for the golf, it’s an excellent choice, but there are plenty of reasons to make Ojai a quick road trip if you live in Southern California.

Our primary reasons were that it was close and relaxing, with the promise of some good food. We hit the road on a weekday afternoon and were in Ojai in less than two hours, including a stop for coffee and gas. I love the winding two-lane drive into Ojai (especially when there is no traffic) because you really feel like you’re WAY out of the city and in a small, rural town. It’s transporting, literally and figuratively. The fact that the weather is almost always gorgeous in the summer and fall doesn’t hurt, either. 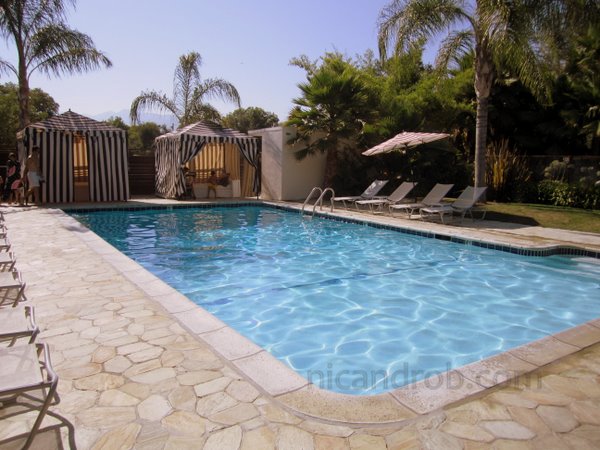 We check into our hotel, spent a little time lounging by the pool and enjoying the warm afternoon sunshine and the nifty cabanas at the hotel, then headed out to spend a few hours at our favorite place in town: Bart’s Books. 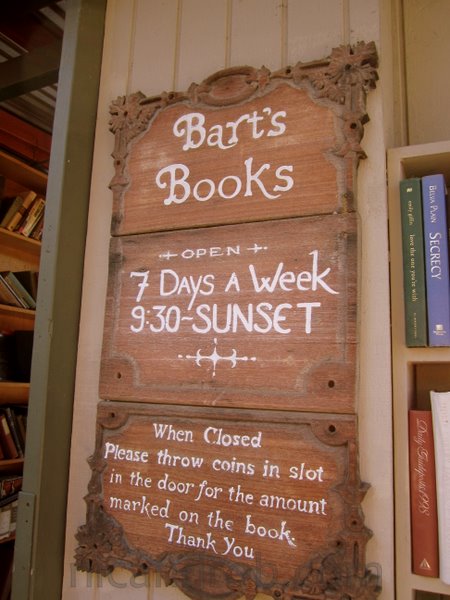 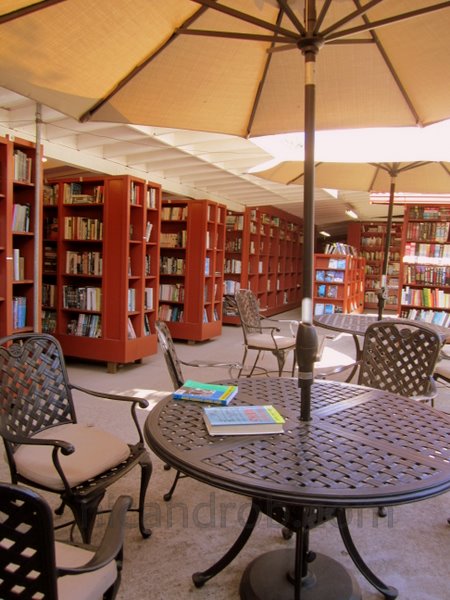 Bart’s Books is a fantastic used bookstore that has been operating in Ojai for nearly 50 years. The bookstore is almost entirely outdoors, having taken over the grounds of a small house and using up every available square foot – indoors and (primarily) outdoors – for bookshelves. You’ll find everything from old cookbooks that cost a dollar or two to rare editions of old classics, kids books to war histories and biographies to science fiction. There is also a very large cat on the grounds who will grab the wrist strap to your point-and-shoot camera if you’re not careful! 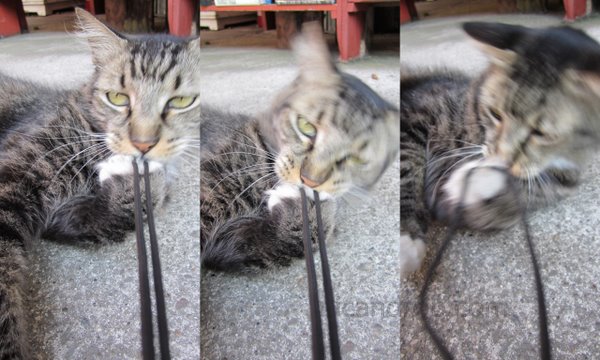 It’s easy to spend a couple of hours there just reading and relaxing. You’ll definitely leave with a few books, but probably won’t spend too much for them. They’re open until sunset, but if you show up after hours, there are several cases of books that face out to the street and a drop slot to slip your payment (by the honor system) if you find one that catches your fancy. 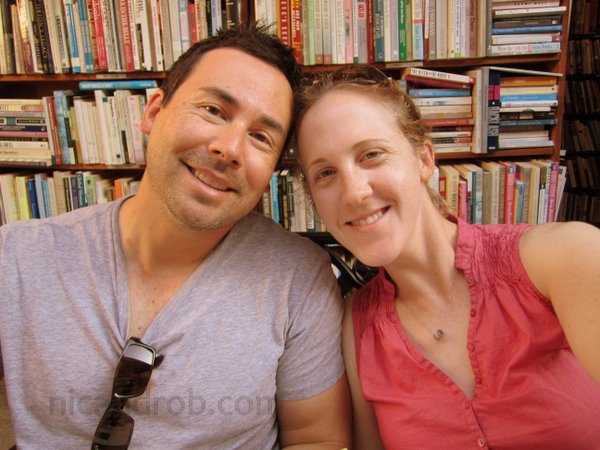 We stayed until close, then headed back to the main street to get something to eat. Most of the restaurants take advantage of the local produce that the region is known for and there are quite a few all vegetarian restaurants in town that are a nod to the much hippier earlier days of Ojai. If you check out a site like Yelp, you’ll probably notice that classic American Italian is the #1 most popular food in town, with the largest number of restaurants (especially if you include pizza).

We opted for pizza at the very casual Ojai Pizza, right downtown. Unlike most of the restaurants on the main street, it was packed even on a weeknight and did a steady stream of take out while we were there as well. You have to order pizza in a pizza place and we opted for a thin crust Manhattan Pizza. It’s a specialty pizza, topped with pesto sauce, seasoned chicken, marinated artichoke hearts, red onion, Italian sausage, feta and mozzarella cheese. The flavors in the topping were fabulous and, while I’ve had thinner crusts, this one had a great flavor and stayed crisp on the bottom the entire time we ate – which very few of the pizzas we’ve had lately have done. 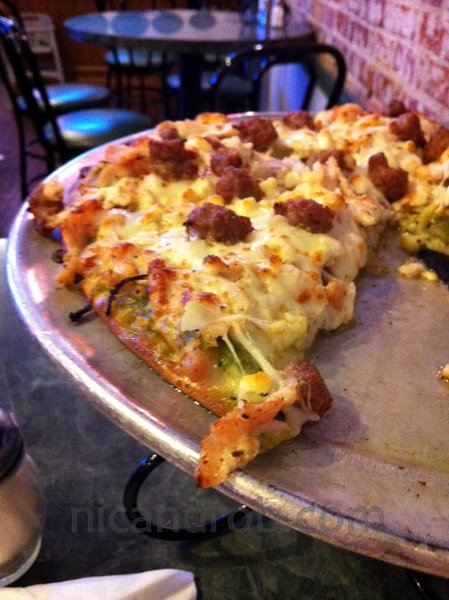 Honestly, we probably would have been totally satisfied with a few hours at Bart’s Books, some pizza and sleeping in. But there are a couple of other Ojai attractions that are definitely worth a mention. If Bart’s appeals to you, the library also has a used book store about two blocks away. The libray bookstore is much smaller and even less expensive. Pick up a few more books and head down the hallway in the back to the Secret Garden. It’s a cute, isolated place to relax and read outdoors – and the fact that it’s a “secret” definitely makes it more appealing for a visit! 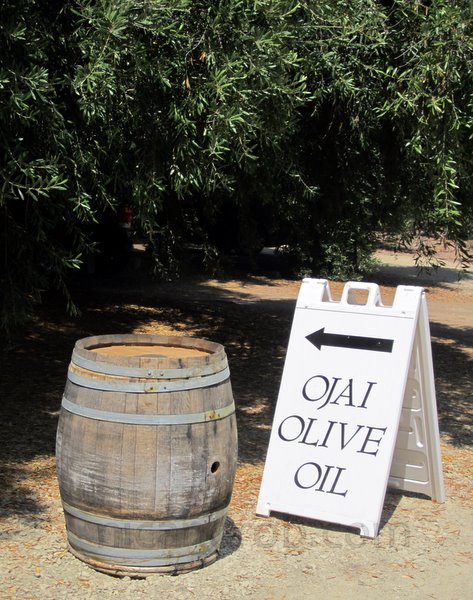 My other must-see is Ojai Olive Oil Company. Ojai Olive Oil is a grower and producer of olive oil that gives free tours and tastings just about every day. Their olive oils are excellent and it’s definitely fun to visit the grove and see how olive oil goes from tree to table. I wrote a whole post dedicated to this visit on Baking Bites. Their tours are by appointment during the week and offered as an open house all day on Saturdays. 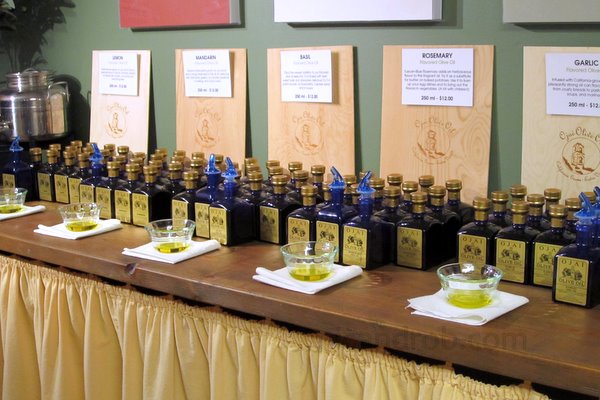 We visited during the week, but if you are in town on a weekend, the Ojai Farmer’s Market is a great place to try some homemade baked goods and pick up locally grown produce. It attracts people from all over, especially during the summer when much of the produce is at its peak.

It might sound like a lot of stuff to pack in to a day or two, but keep in mind that the downtown is really only about 8 blocks long. Things are close together, easy to get to and the overall pace of life is relaxed and slow. Don’t worry if you miss something. Just think of it as saving it for the next time, because once you realize just how easy a one day road trip can be, the next opportunity will be a lot sooner than you think.