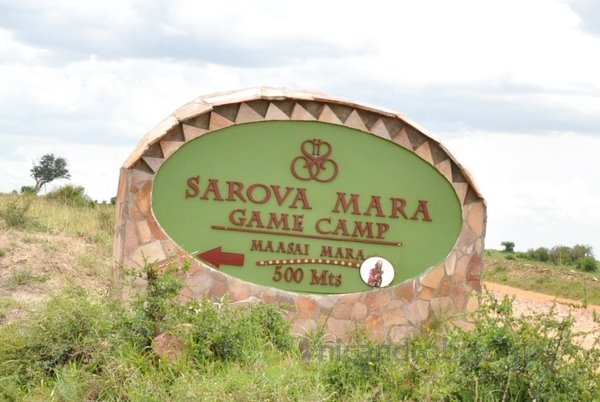 Of course, Day 5 started out with more driving! Today, we were headed from Lake Nakuri to the Masai Mara. The Masai Mara is a huge game reserve in South Western Kenya that connects with the Serengeti in Tanzania. We left early in the morning and our van decided to pass on an optional activity that involved boating to the island where “Out of Africa” was filmed because it added an hour to our already long drive and none of us really wanted to be on what sounded like a small boat in crocodile infested waters. It turned out that the people who went were able to walk alongside the wild animals on the island that was their final destination and said it was well worth it. That said, we were all still comfortable with our decision at the end of the day because (a) we communed with animals at the Mount Kenya Orphanage and (b) the drive was VERY long and rough as it was.

It took us about 6 1/2 hours to reach the next hotel and 2 1/2 hours of that was off road. I have to admit that the roads on Kenya were generally much better than I was anticipating, mostly because I didn’t really expect to have more than dirt roads at all. Quite a few people – I’ll note that they were all older travelers – were complaining that they had no idea how much driving would be involved. I don’t see how it is possible to have not noticed the huge distances between hotels. My primary concern about the trip – after getting sick from water, insects, etc. – was the amount of time spent in the car because that was the first thing I noticed about the itinerary. Fortunately, I found the vans to be very comfortable and the drives to be very pleasant, with lots of locals and beautiful scenery to look at as we traveled, and I was only bothered when the roads got rough. 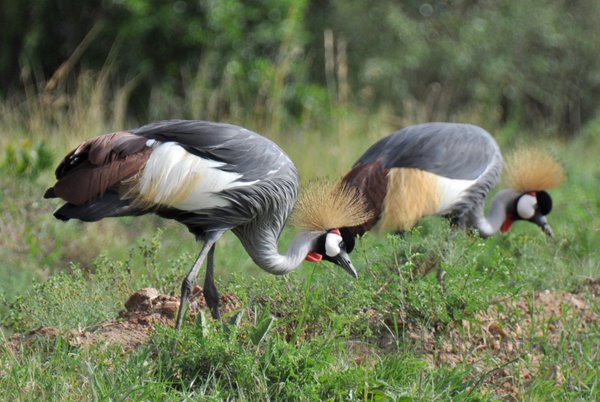 Getting back to the Masai Mara drive, the first portion of the journey was smooth. The off road portion was similar to trying to drive a delivery van over a motocross course, only much less pleasant. The extreme rocking actually put me to sleep for an hour and a half, so aside from some stiffness getting out of the car, I made it through the drive unscathed.

I noticed that the people in the villages we passed looked slightly less poor as we traveled into the Masai Mara area. The houses,while still made with mud, looked a lot cleaner and more well maintained. The herds had many more goats and cattle (10/15 goats=1 cow; 3 cows=1 camel) and both the people and animals looked cleaner and healthier.

I also noticed that our driver veered off of the dirt road at one point and cut through the brush before rejoining the road. The bit he skipped had what appeared to be stalled or broken down station wagon sitting on it, with the hood propped up and two men peering inside. Since he went out of his way to avoid those men, I believe that he thought there was a chance they were bandits and didn’t want to risk getting too close. It seemed like a legitimate concern, given what I had read about bandits in Kenya and the unlikelihood of a stalled car being on the road we were taking. I should note that this road had no other vehicles at all, aside from maybe 5 other safari vehicles that we passed in the 70 kilometer drive. And yes, it does take 2 1/2 hours to drive 70 km when the road is that bad. 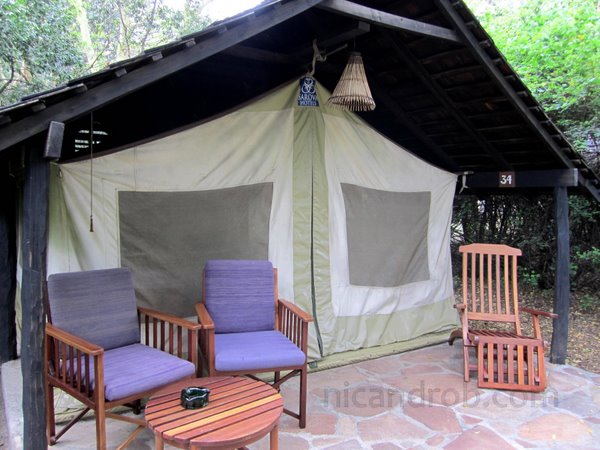 We stayed at the Sarova Mara hotel for our three nights in the Masai Mara. The camp was beautiful, clean and inviting. The rooms are “permanent tents,” which means that they have roofs and wood floors, as well as very nicely appointed tile bathrooms, but have canvas walls and zippers instead of doors. I think they were going for a luxury rustic look – and it worked. The beds were very nice and very soft compared to most of the others (except for those at the Fairmont) we’ve slept in, too. 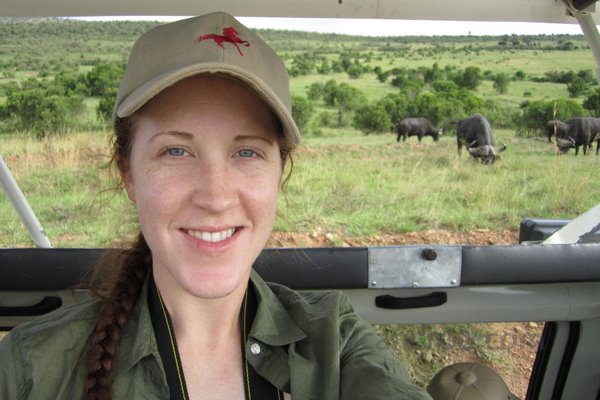 The game drive started out sooner than expected and we left almost straight away after a quick lunch, and although we were all tired, we were psyched to see huge herds of cape buffalo, zebra and eleplants right away. 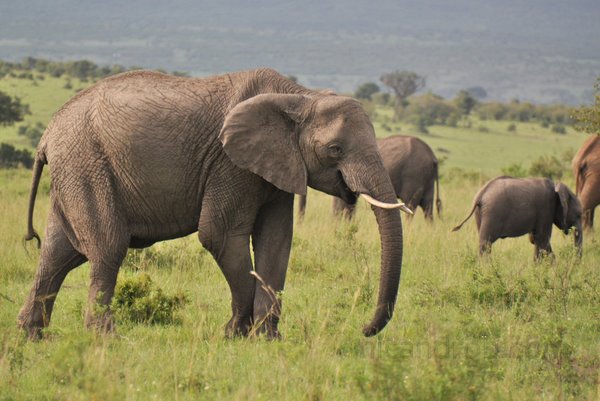 The Masai Mara is known for big cats and that was what all of us were hungry for. After taking photos of the buffalo and elephants, we drove for quite a while without seeing any animals, then spotted a huge herd of safari vans in the distance and figured that they must have spotted something. We raced over to the other vans as fast as we could. It turned out to be a big male lion, who was making lots of little roaring noises! Our driver scooted right around those other vans to try and get us front row seats (easily the best driver, as I’ve said before). He succeed in getting us close, but also got the van stuck in an aardvark hole and we needed another van to essentially push (by which I mean ram) us from the front to get out.

It was worth it because were were about 20 feet from the lion (yes, while stuck in the hole) and he was amazing. Later in the drive, we heard him really roar and that made every animal within 2 miles look up and watch. 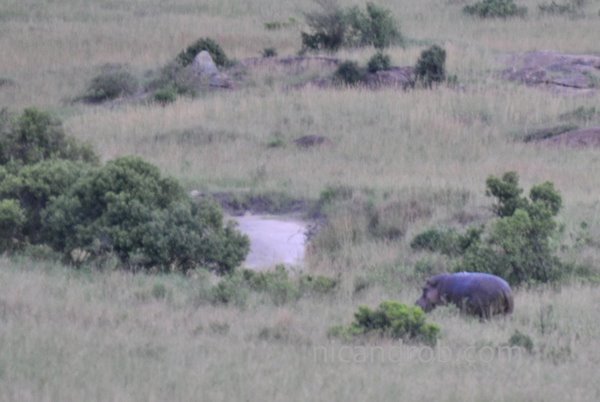 On the way back to the hotel as sunset closed in, my brother spotted a huge hippo from a distance. The thing was out of the water and moving surprisngly fast from one body of water to another. On a tight time schedule to get out of the park, we didn’t have time to follow him, but we did have some very close encounters – less than 10 feet away – with a family group of elephants! 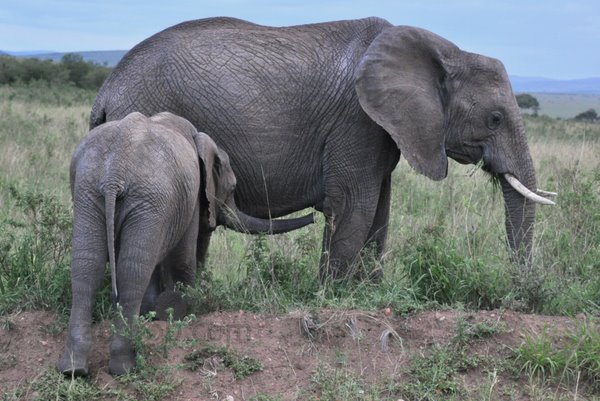 Dinner was a lovely buffet at the hotel, of course, but the feeling of getting into our water bottle-heated tent beds was definitely a welcome one.

Spain and Andalucia, Day 9: Tarifa and Seville
Our hotel in Tarifa, Hotel Dos Mares, had the most…

Kenya Safari, Day 4
Day four of the safari started out with a very…

Spain and Andalucia, Day 1: Madrid
Our first day in Spain started in the very late…