Day four of the safari started out with a very long drive. Well, it actually started out with a buffet breakfast at the Safari Club and me running down to the Animal Orphanage to make a donation because I hadn’t brought my purse down there with me the previous afternoon. I was lucky that they opened early enough for me to visit. It was fun to be there so early in the morning and see the animals when I was the only one there. The baby warthog even called to me when I went over to his pen – those little snorts and squeaks were adorable! The staff arrived just as I did, so I made my donation (you can check for my name on the wall of donors if you visit) and saw them start feeding the animals breakfast before I had to run back to the van. They said that they put a small plaque on the wall for every single donor, so look for my name when you’re visiting!

The drive was about 5 hours to the next hotel. It scenery was beautiful, heading down Mt Kenya and across the Great Rift Valley, which is truly massive. Most of the roads were built by prisoners of war during World War II, so there are several memorials along the road to remember the men who died working on the treacherous and steep slopes. They were in good condition, but that isn’t to say that some of the driving wasn’t harrowing, since it was mostly 2-lane roads. We also stopped at Thompson Falls, where I finally succumbed to some local trinket dealers and I overpaid for some soapstone animals and a few rings that I intended to give as gifts. The rings were definitely a rip off, but I actually like the soapstone animals and didn’t see anything quite like them elsewhere, which made me even more satisfied with my purchase (and not entirely horrible bargaining skills).

The falls were a pretty sight, but the level of aggression in the tourist vendors there was high. There were people trying to put their exotic animals on you for photos and acting fairly rough if you weren’t willing to pay what they demanded. Some people legitimately did not know that they would have to pay for the pleasure of even seeing these animals (such as chameleons) and two people in our group got in a pretty aggressive argument with one of the pushier animal wards, who had foisted his lizard onto this woman’s daughter. Definitely a memorable stop, if not entirely pleasant, but it was nice to stop before enduring the last two hours of the drive. I say enduring because those hours were slow and painful. The road was so bad and full of potholes, that we primarily had to drive on the side of the road – and to say that it was not smooth is a gross understatement. Additionally, everyone else had the same idea, which meant that we were swerving on and off the road, dodging other cars, overtaking trucks whenever possible and bouncing like crazy. Our poor driver was completely exhausted by the time we got to the hotel – ant so were we and all we were doing was sitting there and holding on! 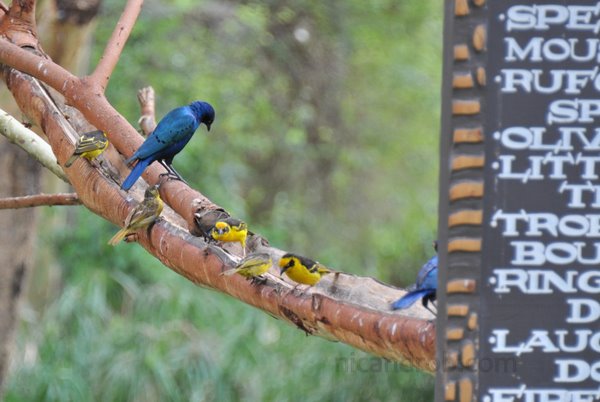 Our Lake Nakuru hotel  was the Sarova Lionhill. The area was much closer to Nairobi and there were many more tourists. The hotel was very busy compared to our previous lodgings, and I heard all different languages being spoken. The hotel itself was nice – and probably only suffered a little from coming right after the Mt Kenya Safari Club on our tour. The rooms are individual cabins that are very cute and reminded me strongly of summer camp. We settled in and scarfed down a quick lunch after the carsickness wore off. After lunch, we had another game drive. 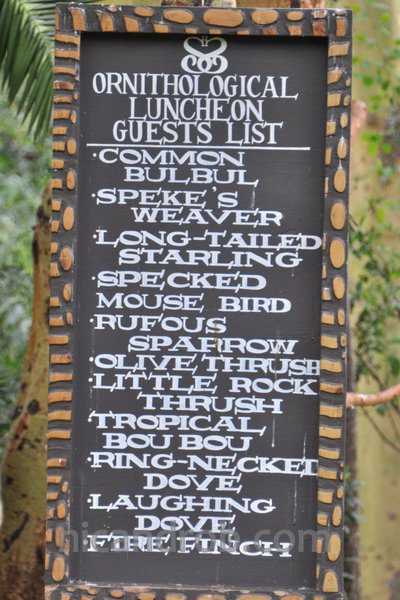 The selling point of this hotel is that it sits on a huge saltwater lake with a big reserve around it. The lake attracts thousands of flamingoes and pelicans, as well as many other bird species. It’s no surprise that it is a big draw for bird watchers. It is also the best place to see rhinoceros, and one of the easiest parks in which to spot leopards. 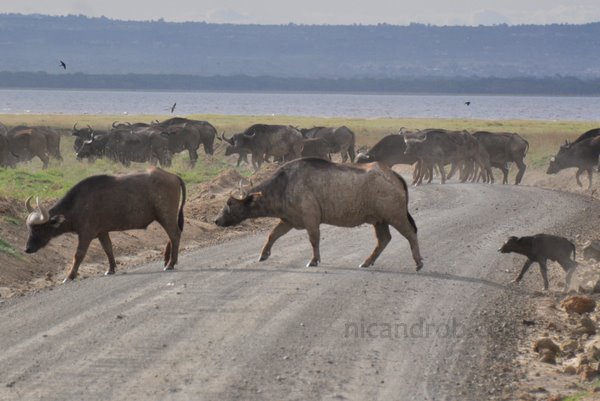 Out on the drive, we ended up seeing scores of zebra, antelope and huge herds of cape buffalo. The baby cape buffalo were unbelievably cute, with huge ears and big, soft eyes. We stayed watching on herd for quite some time before we realized that there were some much larger animals in amongst the cape buffalo: rhinos! A big group was grazing right in the middle of all the buffalo. They were fantastic to see in person – particularly as they moved up close to our vans – because they were so prehistoric looking I almost felt like I was watching dinosaurs roaming about. 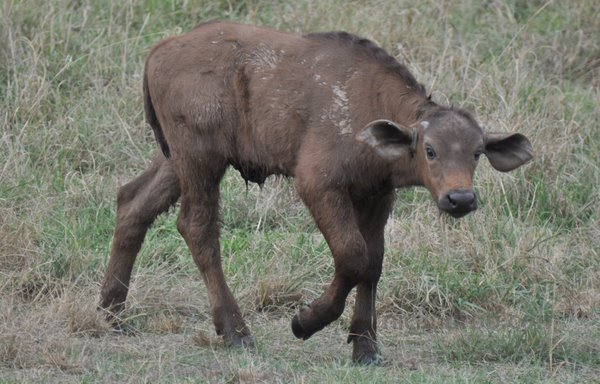 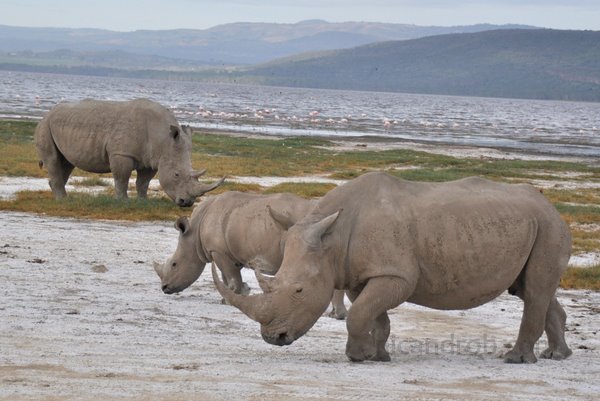 We drove on and spotted a baby rhino with its mother and a male rhino, a small family group. The male was making these sad whimpering noises, which our driver told us was his way of trying to sweet-talk the female. She obviously wasn’t into him, and simply herded the baby this way and that to shield him from our vans while rebuffing the pitiful male. The baby, although he looked tiny compared to his mother, was actually 5 years old. Rhinos are very slow growers and take many years to reach full size. We later saw another family group, a mother with two “cubs” of different ages but both older than this first baby, and it was very interesting to see the different sizes at different stages of life. The most noticeable sign of age is in the horn, which is considerably longer for an older rhino than it is for a youngster. 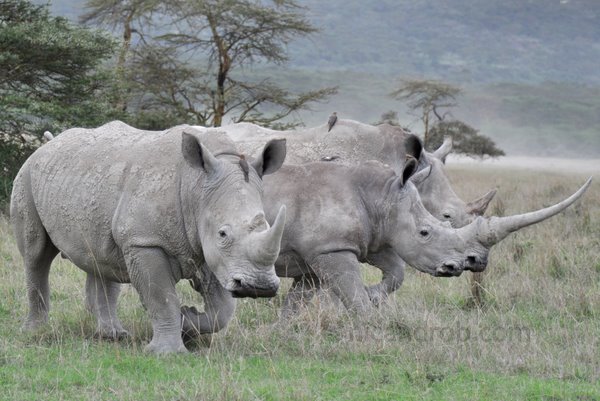 Getting back to the cape buffalo, they are one of Africa’s “Big Five”,  meaning that they are one of the the most dangerous animals to humans and the most difficult to kill. At first, I thought the term came about in reference to the top five animals people wanted to see on safari, but it actually pertains to the top five most difficult kills for big game hunter and has been around a lot longer than tourist-friendly game reserves have been. The buffalo are dangerous because they can charge easily and will just crush you with their huge, solid bulk. They can actually take out a lion if provoked. Just to, illustrate this point , one actually charged our van as we pulled up near him. It was a good thing we hadn’t come to a complete stop yet because there was literally no warning at all and he came on fast! I snapped a pick as we just barely got away. 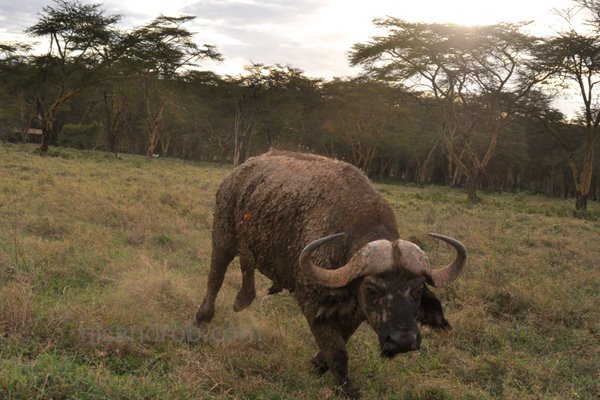 One of the last things we saw was a pride of lions – maybe 6 total – one of which was laying under a tree right alongside the road. Clearly, the other vans had been there long before we had and they all lost interest in the sleeping lion not long after we pulled up. This gave us a great view of the sleeping male (the other lions were quite far off, being watched by a very concerned herd of zebra). We were very patient and watched the lion for at least 15 minutes. Once all the other vans had pulled away, the lion got up, yawned like crazy a number of times and started grooming himself like any house cat. It was pretty adorable – and we had a perfect vantage point for watching. 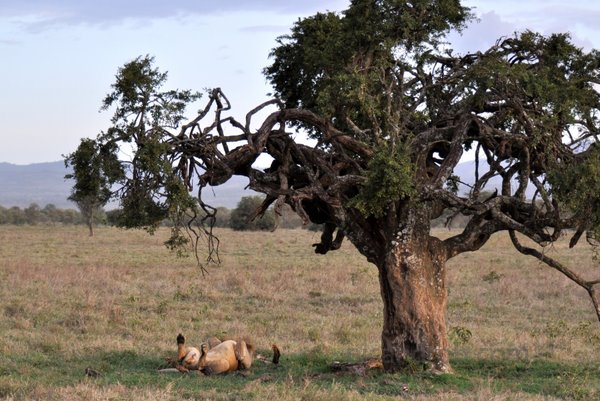 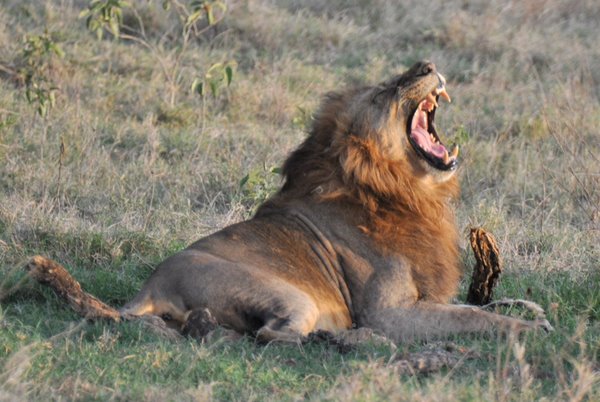 Then, our driver got a call on the radio about a leopard sighting and we shot off to try and find him. It was getting dark, but we arrived just in time to see the leopard get down out of his tree and crawl into the tall grass. We were too far off to get any good pictures and, with night closing in, our odds of seeing him again were very slim. Again, the other cars gave up and headed back to the hotel, but not our driver. He backed our van up along the road and helped us stalk that leopard for a good 30 minutes (until it was too dark to see). We managed a few more glimpses of the leopard before heading back to the hotel.

Later, I ended up talking to some other people on our safari about their guides and their experiences. While they mostly had positive things to say, I came away with the impression that our guide was definitely the best of the bunch. He’s an outstanding driver and is clearly the most interested in making sure that we see what we want to see, not to mention that he tries to get us the best angles for photos, too. Other people reported that their drivers fell asleep behind the wheel while watching game (ours uses binoculars to spot things we might have missed), use reference books to come up with more facts (not a bad thing, but our guy seriously seems to know everything after being a guide for 18 years) and leave before the group is satisfied. This is probably also a testament to our group – my family and a pair of sisters about the same ages as me and my brother – as we are a very happy, agreeable bunch and get along splendidly with each other and our guide. A few other members of the safari (with other guides) have personalities that are… a little over the top and with very high expectations, so some of the comments about other drivers I took with a grain of salt, as I know that nature along wasn’t necessarily going to satisfy everyone. But I still think our driver was top notch.

Dinner, as usual, was a buffet. After dinner it was time to return to the cabins, enjoy the hot water bottle-prepped beds and get a good night’s sleep after a surprisingly tiring day!