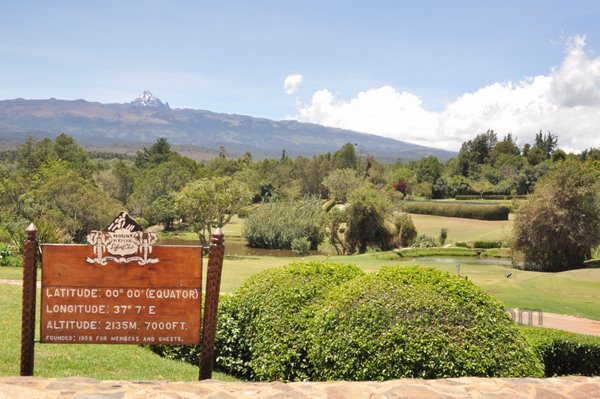 The third day of our Kenya safari was a traveling day. After a quick breakfast, we all packed our things and headed out to the vans. The monkeys obviously had the human schedules down pat, because we could see gangs of them traveling from room to room testing the windows to see what rooms they could easily break into and raid for snacks while we loaded up our things on the lawn. It made me glad that I always secured the windows of my room! We headed out to our next destination: The Mount Kenya Safari Club.

The drive was several hours long, and a lot of it was up a very, very steep hill. I definitely had some concerns for the overcrowded local cabs/busses as they struggled up the grade, though they all seemed to make it in the end. Heck – I had some concerns for vans in our own group! The scenery was stunning, with lots of huge farms that clearly thrived in the rich soil. It was somewhat sad to see the “squatters” tending their own tiny crops on the roadside, just across the fences from the plantations, but those tending their small crops looked happy and, as the rainy season was just starting, their crops looked very successful. 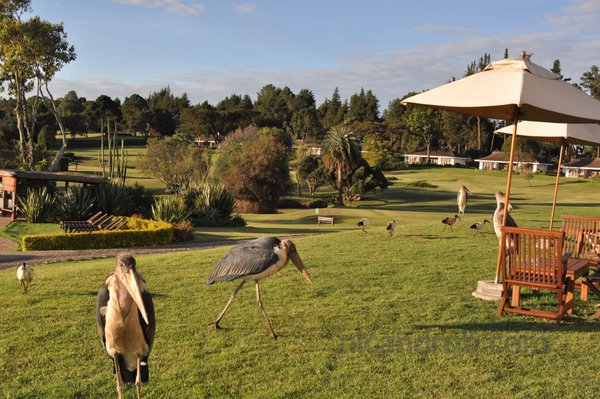 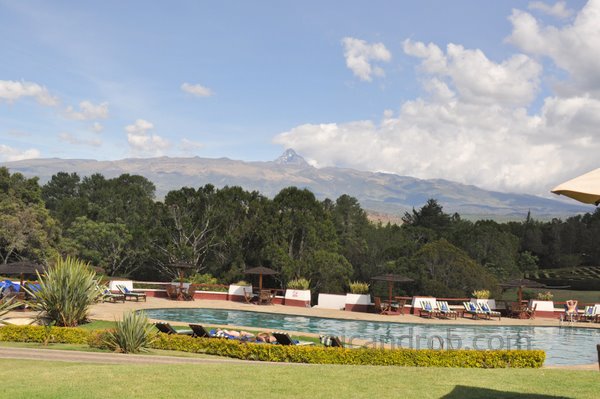 The Safari Club is nothing short of amazing. It is the oldest and most luxurious safari lodge in Kenya and it is easy to see why. It has a beautiful location, gorgeous grounds and the best view of Mt Kenya that you could ask for. Lots of “old Hollywood” stayed here on trips to Africa, as well as royalty from England and elsewhere in the world. To give you an idea of how upscale it was back when it opened, no colored people were allowed on the property – not even as servants or staff, although the British colonists and safari-goers typically used local servants in the rest of colonial Kenya. This note isn’t intended as commentary about the time period in which the Safari club opened (and it opened as a hunting lodge), but as an unusual piece of history. In fact, I actually read this on a paper, framed and posted on the walls of the hotel with other decades old documents and photos chronicling the history of the property. 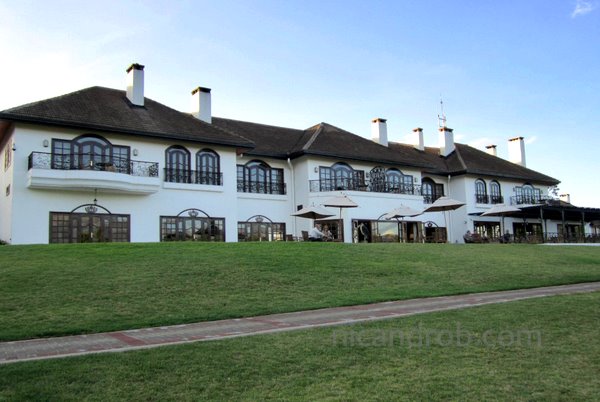 I lucked into having a suite at the Club, simply due to how the hotel had chosen to arrange the rooms for our group. The suite was huge – a sitting room, bedroom, dressing room and bathroom. Everything was well appointed and the bed was exceptionally comfortable. They offered a service to come by the room and light the fireplace in the evening, in addition to the standard service of tucking hot water bottles into the beds. I didn’t take advantage of the fire place, but I did thoroughly enjoy the small french press on the coffee tray in the room before breakfast. I was able to take a look into one of the regular rooms, and it was nearly as large as the suite, with a lovely sitting area. The main difference was that there was no dressing room, but a regular room at the Club is a lot like suites at some other hotel chains. 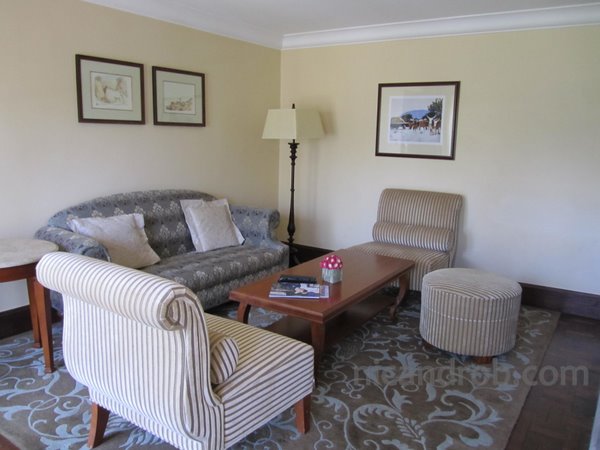 After a morning in the car, I was ready for a quick snack at the lavish buffet lunch before heading out for some activities. There was a lot to choose from, from golf to horseback riding. Honestly, I wanted to do it all, but we were only scheduled to stay one night and I had to pick and choose a little bit. The first thing I did was set up a horseback ride in the reserve. The second was to head to the Animal Orphanage.

The Mount Kenya Animal Orphanage is located on the grounds of the Safari Club, but is a nonprofit that is not affiliated with the Club. They raise injured animals and have breeding programs established to try to reintroduce endangered species back to the Kenyan game parks. The primary examples of this are the Bongo (a striped antelope) and the Colobus monkey (looks like a skunk, with very long hair) because they were hunted for their coats to the point where there were less than 100 of them in the wild. More Bongo are actually bred in the US for zoos and other parks than still exist in Kenya, so some members of staff at the Orphanage told me that they were planning to ship some over from the US to release in the Mt Kenya reserve. 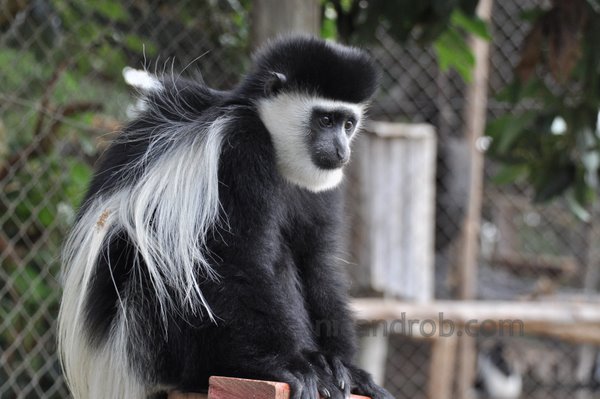 The breeding programs are fascinating, and it is obvious that everyone on staff was very dedicated, but the main draw here was the Orphanage itself, where you can interact with and pet all kinds of animals that would normally only been seen in the wild. Many were rescued, injured, from the reserve and others were donated. Some will be reintroduced to the wild, some could actually come and go as they pleased, and others were permanent residents. 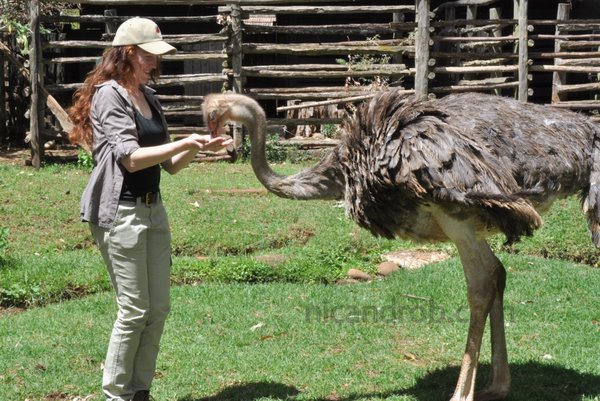 When you entered, one of the staff would come up and give you a tour of the facility, introducing you to the animals, telling their stories and providing treats to pass out. It was a blast to get so close to the animals. I could have spent hours there – but, unfortunately, was limited to just a couple before I had to get on to my next activity. Feeding the ostrich was pretty exciting, as she was so huge and I was pretty sure that she could take a finger off if she really wanted to. I also got to ride a 100+ year old tortoise named Speedy Gonzales. 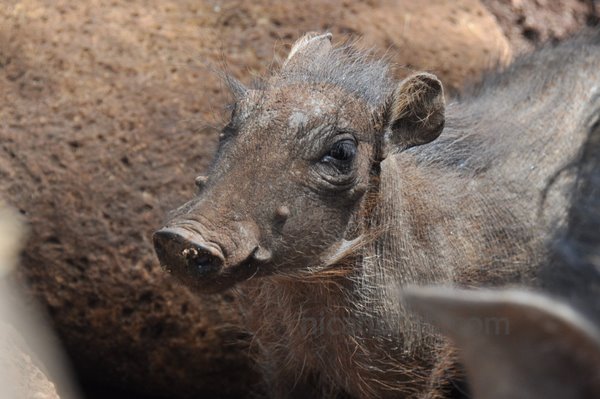 Other highlights of the Orphanage included: petting the baby bongos, playing with a baby antelope who stalked us for treats, oohing-and-aahhing over a hairy forest hog and the orphaned baby warthog (so cute!) it was raising. The reserve also had pygmy hippos and a “zebroid,” which turned out to be a 35 year old horse-zebra mule that was bred as a pack animal by a hunter (quite a while ago) and was simply retired at the orphanage. I never really wanted to hold a monkey, but it was pretty exciting to feed pieces of banana to one sitting on my shoulders. I worried about the monkey peeing on me, but decided that the monkeys probably learned pretty quickly that peeing on people means that they don’t get any more treats! 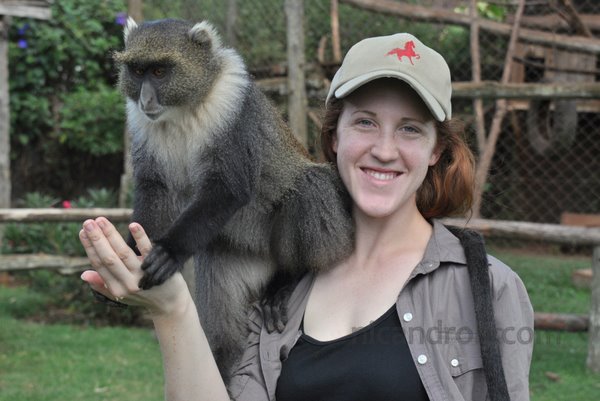 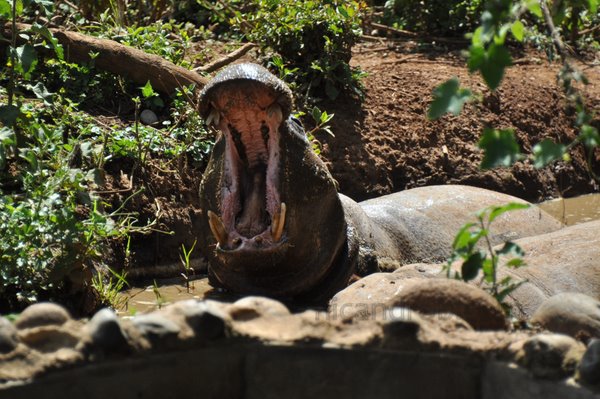 After the orphanage, I got ready to go riding. When I was signing up for my horseback ride, which I was very excited about, some woman from our tour came up and wanted to sign up her daughter. I had just signed up for an advanced solo ride (with guides, of course). I have been riding for a long time and love to go for trail rides when I’m visiting another country. I’ve been on enough trail rides to know that people – as a general rule – do not have a good grasp of their horseback riding proficiency. I also know that as a fairly advanced rider, I have much better rides when I’m not out with other riders who need a lot of hand holding. This isn’t to say that I am against a very leisurely, walking trail ride – but it is to say that when the opportunity for a more exciting ride comes up, I’ll jump at the chance to do it.

I was dubious that the girl, who was about 12 or 13, knew how to ride but agreed to let her come out with me so that her mom didn’t have to tag along. The little girl was very nice and very excited, and I could definitely sympathize with the nonriding mom of a horse-loving kid. To make a long story short, the little girl was a beginner who had only ridden a few times (possible with no solid instruction). I was a little disappointed, but the scenery was so lovely that I wasn’t really put out at all by the situation. 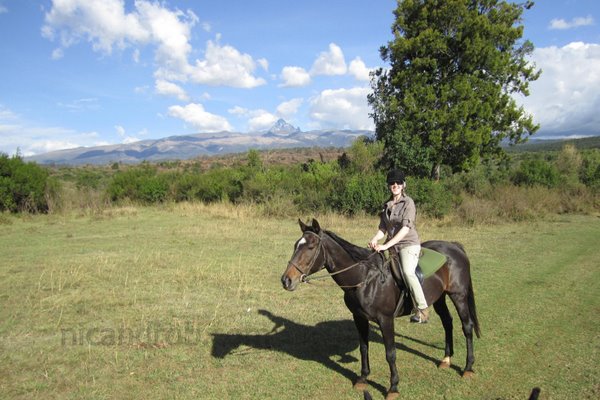 Luckily for me, the guides were on top of things. They allowed us to split up because I “needed to do more!” (in their words) and the little girl needed a riding lesson! One guy took the girl out and taught her how to trot the horse without falling off for the duration of our ride and I went on a big gallop through the mountains with the other! It was amazing – the excellent horses, the scenery, the whole experience. It was easily the best trail ride I’ve ever taken. To top things off, I also saw a whole herd of zebra and antelope! When we met back up with the other guide and the little girl, it was clear that she had also had an excellent ride and was just thrilled about it. I made sure to give them a big tip when we got back.

Dinner started late and most of the people in our group spend a couple of hours hanging out at the hotel bar, feeding nuts to the Maribou storks, sipping cocktails and enjoying the atmosphere before dinner. There wasn’t a single person who didn’t love the Safari Club and everyone agreed that they wished we had one more night there! I also used the time at the bar to multitask a bit, catching up on emails using the free Wifi while sipping a cappuccino (I was too tired after my ride for a cocktail).

Every meal on the trip was served buffet style, but dinner at the Safari Club was a semi-formal sit down meal with four courses. Way too much food, but it very well prepared and presented. I had a big, perfectly cooked steak (served with a strangely sour sauce) and my dessert of a white chocolate and macadamia nut banana cream tart with fire roasted banana ice cream was delicious. My only regret about dinner is that it was far too dark to take any photos of the food in the dinning room.

I wrapped up the evening with a FaceTime chat back to Rob at home – a fantastic bonus of having wifi at the hotel – before settling into bed for the night.

One Souffle at A Time: A Book Signing Party with Anne Willan
Last weekend, Rob and I were lucky enough to be…