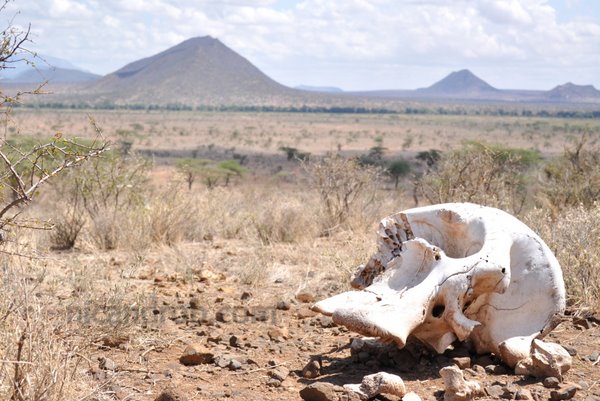 Day two of the safari started out a little rough. The bed was ridiculously hard and I must have woken up a dozen times at night trying to get comfy – and I am normally not a light sleeper. I gave up at about 4:30 and just laid in bed with a sore back listening to the animals outside without getting up. Eventually, I realized that my brother was also awake and we spent a while cleaning the room and planning the day before it was time to go to breakfast at 6:30. When we finally got outside, the grounds were overrun with monkeys and baboons. The hotel’s baboon chaser – armed with a slingshot to shoot *near* the monkeys and keep them out of the dining area – was very busy. The monkeys still scored quite a few pieces of fruit from unguarded plates, however. 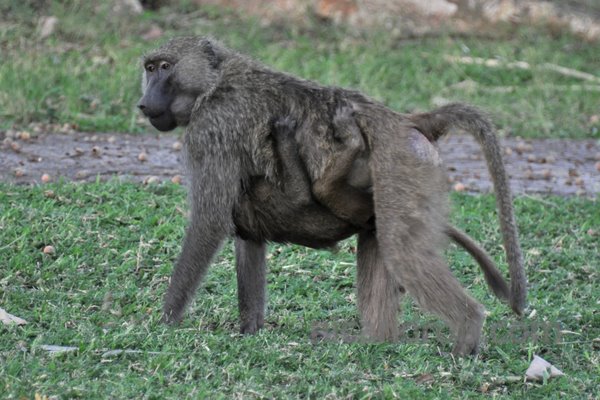 Our game drive started at 7:30 and our driver told us it would be a long one, so I packed a granola bar in my camera bag for a snack. The drive was great. We started out seeing a group of about 200 baboons, all moving across the plain. The group included babies, mothers and quite a few large and intimidating males. The scouts seemed to spend a lot of time standing upright, which was interesting and a little creepy. We drive through a different part of the reserve than we had the previous afternoon. 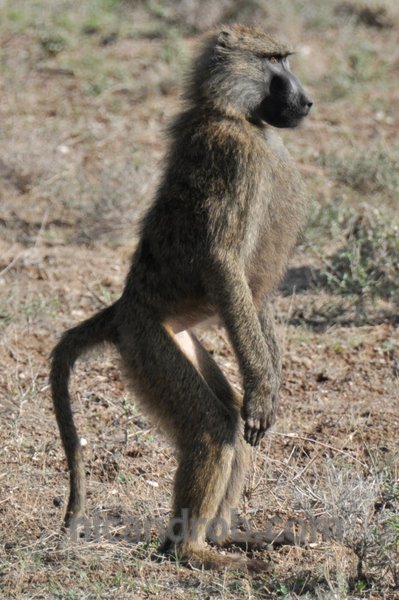 As the drive progressed, we saw all kinds of animals. Dik diks – ridiculously cute tiny antelope that look like a hybrid between a bunny and a fawn – were a favorite of mine. They pair up for life and, despite their small size, are very territorial and aggressive according to my driver. 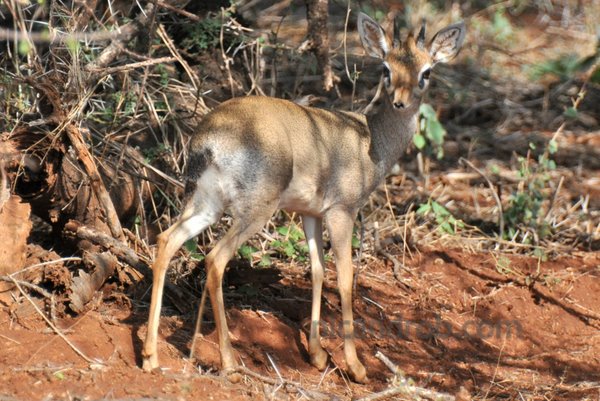 I also liked the water bucks, with their heart-shaped markings on their noses. 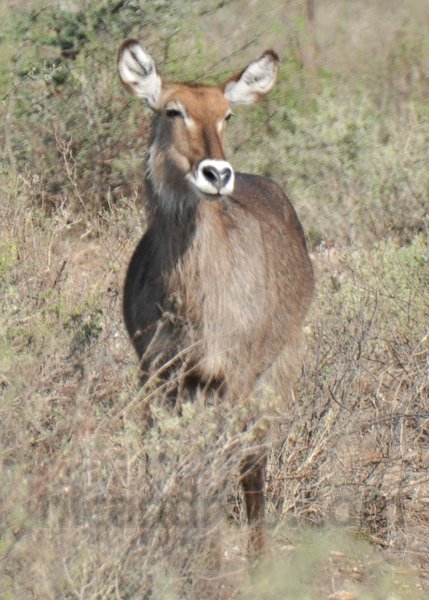 I was also a big fan of the gerenuks, also known as Waller’s Gazelles. They were extremely stylized, like something from an art deco era, and incredibly graceful when they moved. They also stood on their hind legs browsing the bushes and scrubby trees for food, which seemed to be a behavior unique to this type of antelope. 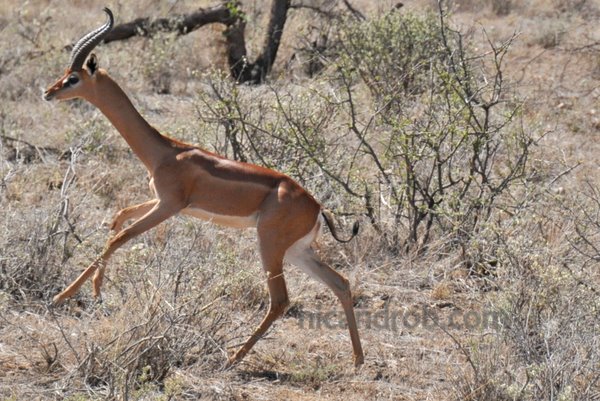 The giraffes were amazing, especially when we came right up on a big herd of about 7 of them together. The group consisted of giraffes of all ages, and they took turns keeping a lookout – mostly at us – while they drank from the watering hole near by. 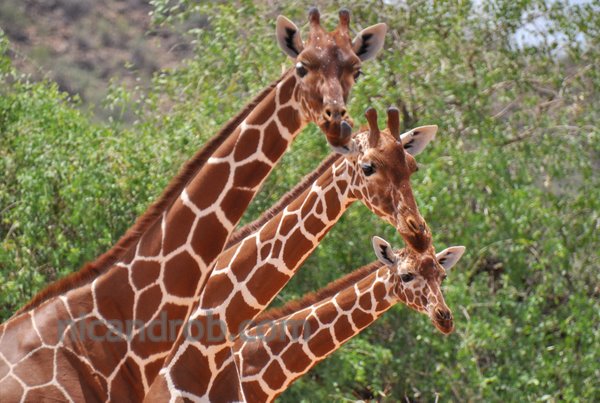 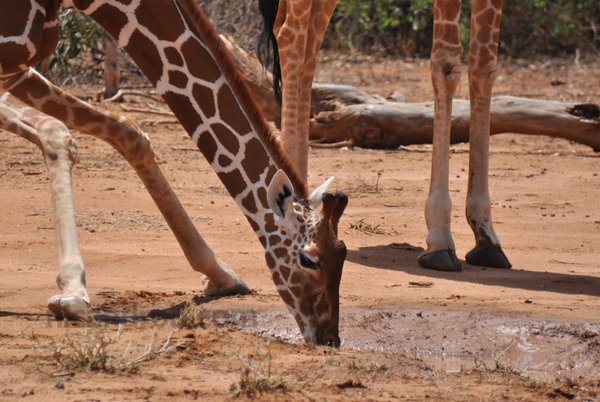 The other highlight was seeing a cheetah. He was snoozing under a bush and we pulled up about 10 feet away from him. Some of the other van drivers were a little more conservative than ours and didn’t get quite as close – not until we did, anyway, and then they followed us right over! The cheetah spent about 5 minutes checking us out and getting comfy, then laid back and went to sleep. He was adorable. 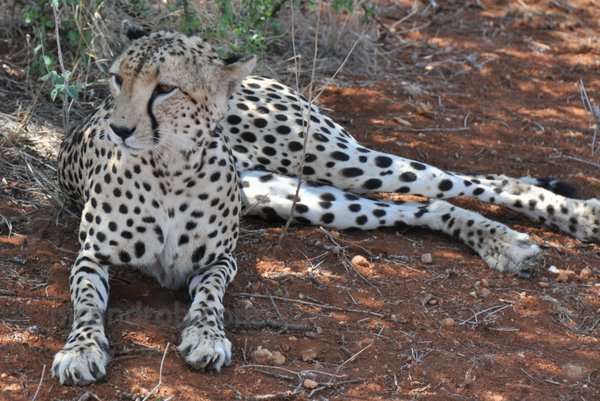 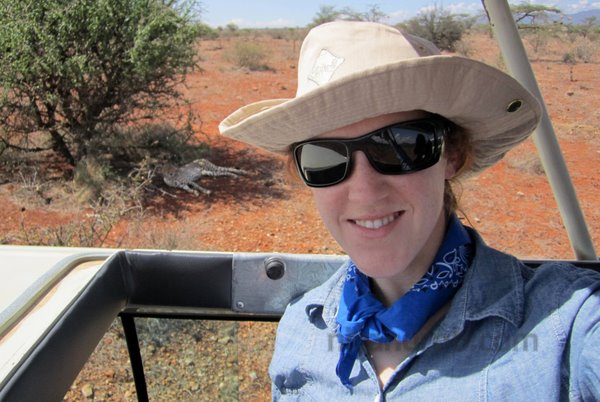 All of this took about 4 1/2 hours and I was starving, so I ate the granola bar even though I thought we were heading back for lunch. It is surprising how you feel like you’ve been “working” fairly hard, when all you’ve been doing is driving around in a warm van! That said, it is quite a lot of effort to stay in the seat – and jump up and down for photos – when the van is off-roading over none-too-smooth Kenyan countryside. It was a good thing I had that granola bar because it turned out that we weren’t heading home just yet: We were actually heading to a local Samburu tribe village. 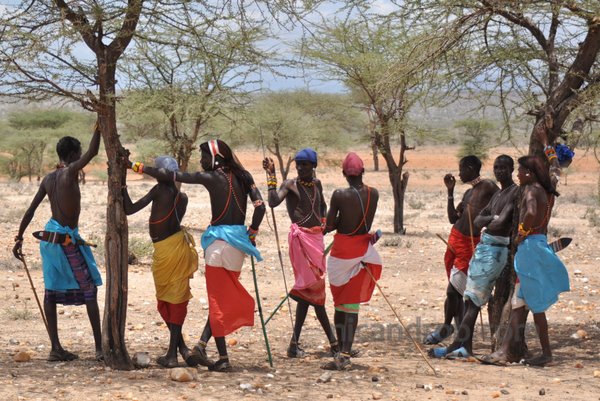 My brother is an avid juggler and was looking forward to going to the village to juggle for the kids there. It wasn’t on the top of my list of things to do, however. Up to this point, the tour guides had made it sound like an optional activity, not a mandatory one. This was partially true. I assumed that “optional” meant that we could stay at the hotel if we didn’t want to go. It turned out that the “option” was to give the tribes people $20 per person and get a tour of the village and meet the people there or sit on the hot bus and wait. I opted for the village. 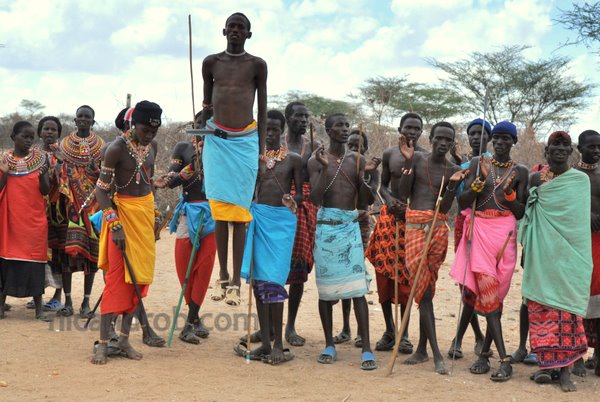 The whole thing took over 1 1/2 hours. They started by putting elaborate beaded necklaces on all of us. The village leaders were friendly and kept reassuring us that it was ok to take pictures and that we weren’t obligated to buy anything unless we wanted to. They then took us on tours of the village and inside one of the tiny dung huts. Going into the hut where they lived with 7 people (or more) and chickens – given that the hut was made of cow dung and sticks – was a bit unpleasant on such a hot day, though it was interesting to see where/how they lived despite the fact that I was not keen to crawl into the hut initially. The more interesting point was that dung structures were idea for nomadic tribes and this tribe no longer seemed to be nomadic, yet had not moved on to more permanent-looking structures. 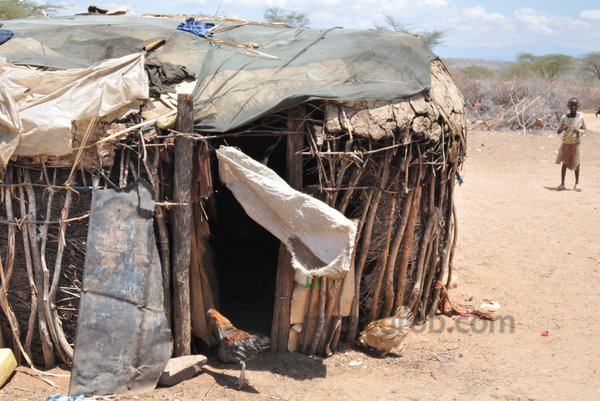 It was during the tour of the village that the experience really deteriorated. The “leader” of the village (not the chief, just the organizer of the visit because he spoke english), yelled at my brother for juggling for some of the very small children (because it was DISTRACTING people from buying things) and we were all shuffled through a massive gauntlet of people trying to sell us necklaces and do-dads. Even this wouldn’t have been so bad if we were not repeatedly pressured to bargain with the sellers – who were trying to get $45 for necklaces and tried to guilt shoppers instead of actually bargaining. 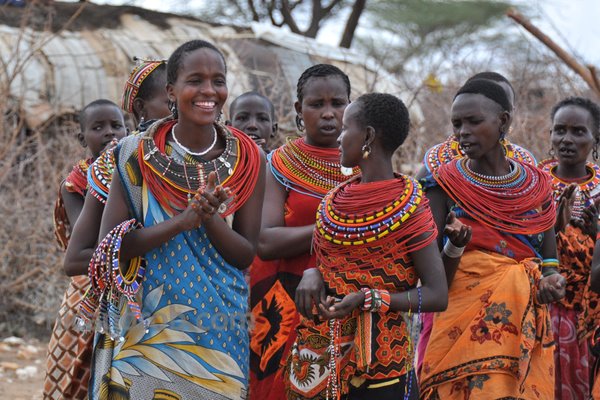 It wasn’t that people didn’t want to buy souvenirs or support the tribe, but no one wants to feel like they’re being ripped off or not treated with respect. My brother, for the record, did get to do some juggling. The older kids (13+) loved some of his tricks. The very little kids (3-5) were a little freaked out and literally ran screaming. It was funny and sad at the same time, as the tribe leader showed up and made him stop, and he didn’t have the opportunity to explain to the kids how some of his illusions worked.

We finally got out of there after everyone made it through the gauntlet and headed back to the game lodge for lunch and to rest for a couple of hours before the afternoon game drive. During lunch, everyone chatted about the tribe experience and, even though everyone found it very interesting, the experience as a whole was disliked for the reasons I outlined above. One other reason that people cited was that they had been told (by guidebooks and travel agents) to bring small toys/tops/pens for the tribal children and the leader of the tribe tour (who was not the chief, just the guy that spoke English) insisted that they not give the children anything unless they bought something first.  Of course, before we left they were able to give out the toys (somewhat secretly), much to the great delight of the children. The village was interesting and the actual tribespeople were pleasant – but the way that the village leaders ran the show? Let’s just say that they would probably make a lot more money from tourists by running things slightly differently.

Our afternoon game drive was in yet another part of the park. It was very uneventful, as game drives went, and we literally only saw one animal: a lioness under a tree in the distance. The drive was short, however, and the scenery was beautiful so it was still an enjoyable way to finish off the day. 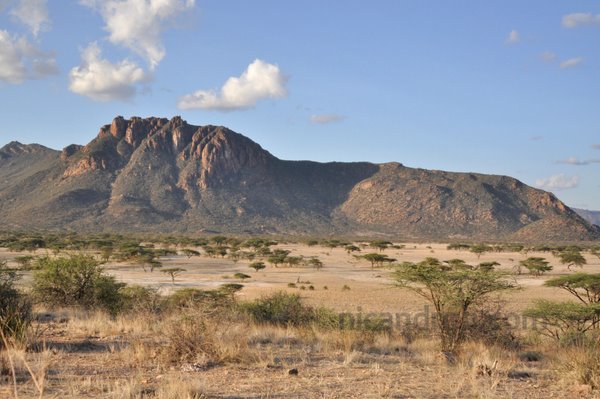