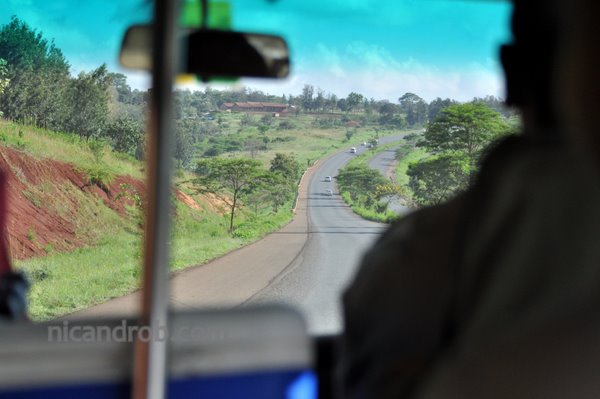 We left Nairobi (thankfully) right after breakfast. Breakfast was a pleasant, buffet-style meal at the Stanley. We met up with a few other people traveling in our group who mentioned that the hotel security staff made them return to their rooms to leave behind all cameras and jewelery when they ventured out into the city the previous afternoon. Needless to say, that didn’t make me want to do too much sightseeing in Nairobi. I was glad to get in the vans and hit the road.

Our group had 28 people and we split into 5 vans. Two girls, sisters from the East coast, joined my family in our van. Pia and Natasha were outstanding traveling companions, so we lucked out considering that we asked them to join our van on nothing more than a whim!

The city is developing,to put it nicely. I’m sure there are probably nice parts, but I didn’t see them. Getting out was pretty crazy, as the road was under construction. This means that parts were seriously bumpy dirt paths and part were paved highway – and it appeared that they paved about 100 feet every 300 yards or so, rather than paving as they went. This resulted in a lot of weaving back and forth, big ditches and lots of bumps. I got a little carsick. Actually, I think just about everyone did. The interesting thing I noted is that most of the roads out of the city – both the new and old roads – do not have lane lines dividing them and most of the roads around Nairobi are 3-4 lanes wide in each direction. When the road narrowed to one lane in each direction, there were still no lines. I think that the amount of swerving we had to do to avoid other cars contributed to the car sickness. Fortunately, after about an hour of driving, the roads smoothed out and it was clear driving from that point on. 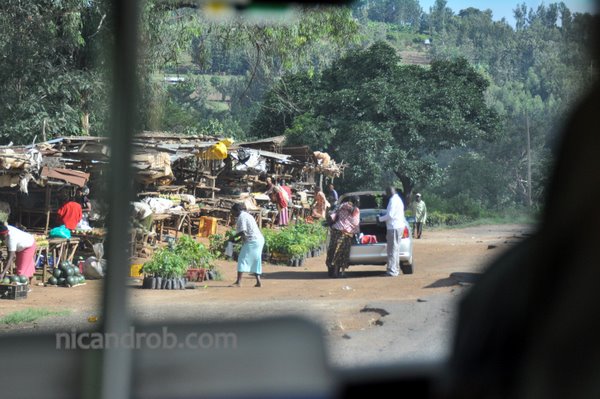 We spent about 6 hours driving to the first camp. The countryside was very beautiful and varied from tropical and Hawaii-like to flat desert. There were houses,huts and towns all along the way. Watching make the time pass fairly quickly.

The road condition deteriorated once we arrived at the park. It was more like a dirt bike track, but rougher. It was so crazy that it was actually fun – if somewhat uncomfortable – to drive over it. Our first hotel was the Sarova Shabu Lodge. The rooms are really quite nice. All are very large and look out over the river that flanks the hotel grounds. There were many birds, monkeys and other animals relaxing in the shade and enjoying a drink. There were actually a ridiculous number of monkeys and baboons hanging around the front of the hotel, so many that the hotel employeed a full-time monkey-chaser whose job was to scare them away from the dining hall. The monkeys were tiny and cute, and there were lots of babies that reminded me of the Gibraltar apes. The baboons were not as cute, and were (fortunately) pretty aloof. 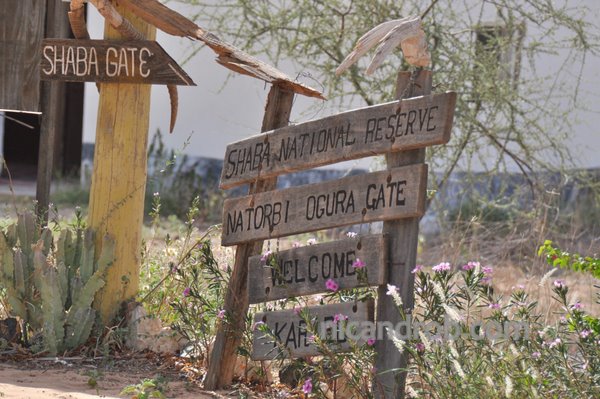 After a quick lunch, we set out on an afternoon game drive. The drive was amazing. To be honest, I had no idea what to expect, but we saw an incredible amount of wildlife – and they were incredible close to us! We saw zebra, oryx, gazelle and a few warthogs and jackals. We also saw about 50 elephants, but weren’t able to get that close to them. They did help make for some amazing sunset photos, though. The zebra were amazing and beautiful to photograph. The baby onxy was probably the cutest thing I saw, though. It couldn’t have been more than a couple of weeks old. 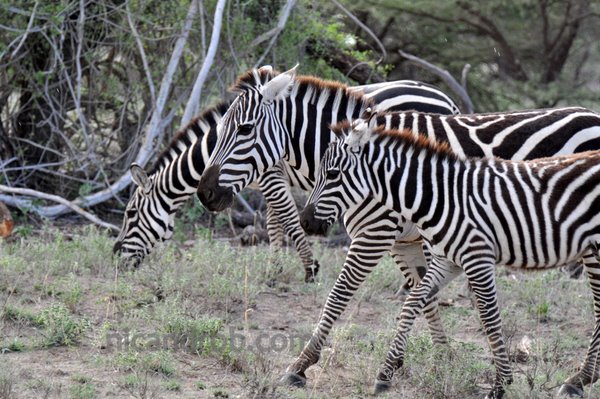 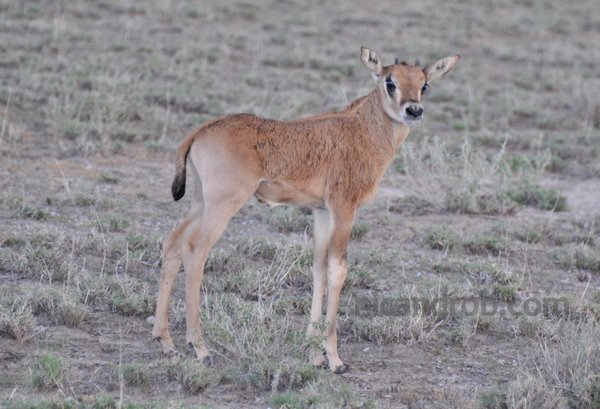 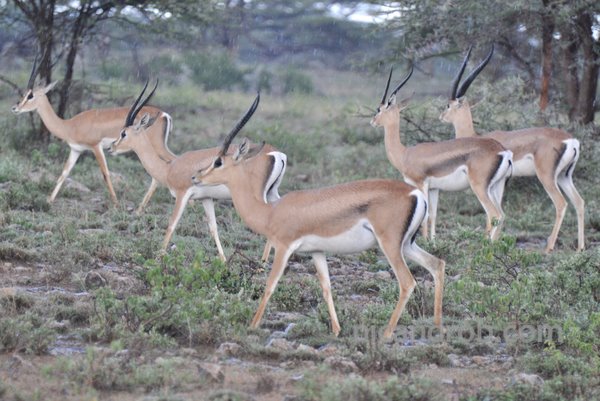 We got caught in a downpour that lasted about 20 minutes. We didn’t get too wet in our vehicle, even with the safari roof thing raised, but it was enough to soak the tracks that the cars took. It gave me a good idea what rally driving might feel like in a big van full of 7 people: sliding and skidding all over the place withthe engine revving. our driver really was excellent, however. He said he’s been doing this for 18 years. 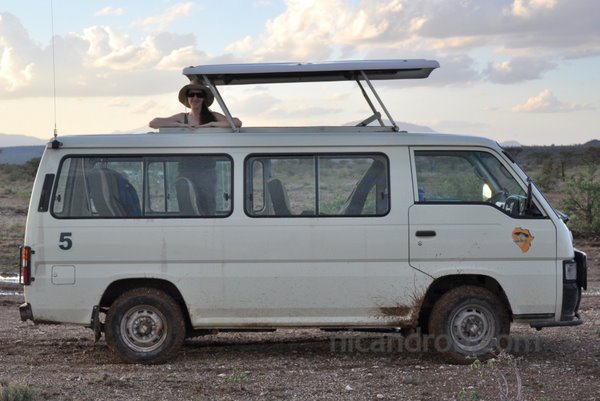 We saw one other van that got caught in the mud and stopped to help. Another van was already there, hooking up a tow line to the stuck truck. Well, after two tries at tugging them out, the tow hook snapped off the stuck truck. Our driver took us to a dry spot and went back to help get the stuck van out. I don’t know how they hooked the line back up to it, but I think they somehow wedged some tree branches under the tires to give it a little purchase getting out. It was kind of fun to watch – I’m glad it wasn’t us! 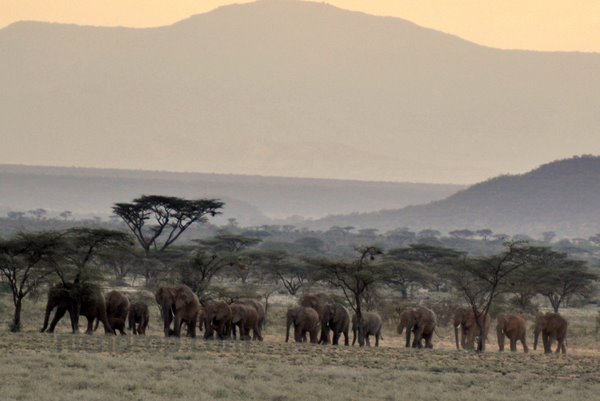 We didn’t get back until 7:30. Before heading to dinner, I watched some huge crocodiles lounging on the bank of the river in front of the hotel. They feed them scraps a couple of times a week to encourage them to come out. They were massive (and rather obese looking). They made the aligators on that swamp people show look like iguanas.

Dinner was right next to the river. Everything is served buffet-style and have a mix of American-European food and Indian food. The Indian stuff is actually quite good, lots of chicken with yogurt sauce, lentil soups/dal and Indian flat breads. There are also quite a few vegetarian Indian options. After all that driving, I was exhausted and couldn’t wait to get into the mosquito nets (which were hung around the beds)  and fall asleep!