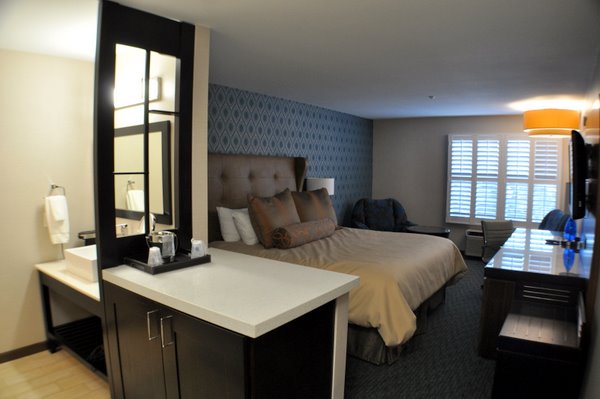 The hotel was situated just off highway 29 in Napa. The location isn’t in downtown Napa, but it is perfect if you’re planning to do a lot of wine tasting or to drive to nearby towns like Yountville and St Helena. Despite the reviews online, it turned out that the hotel was still under construction when we arrived and the sign wasn’t even up (hence no pictures of the front of the hotel), but it was clearly just about done and the interior of the hotel looked exactly like the pictures shown on the hotel website.

It was a treat to stay in a hotel and really know that the very comfy bed you’re sleeping in is almost brand new.

A friend who lives in Napa told me that the original building – a rather run down hotel – was bought by a development company that wanted to demo it and rebuild from scratch. The city wouldn’t approve the project, so Best Western stepped in and agreed to renovate the building as it stood. The hotel looks clean and modern, with a much more upscale feel to it than many other Best Westerns (not to mention other hotels in the area at this price point). You can tell that they made a few compromises here and there as the renovated the rooms, but they are very minor. For instance, the roomy drawers of the dresser basically touch the bed when they’re opened all the way because the hotel couldn’t really adjust the room sizes all that much. To make up for it, the room is extremely spacious lengthwise, with a big seating area even in a basic room.

The bottom line is that the rooms look great, well appointed and relaxing. I loved the two-part bathroom and the big marble countertop that opened up part of the bathroom space into the room. The room also had a nice, big mini fridge (great for wine!) and a microwave.

The lobby had some great, modern decor and the staff was very helpful. The continental breakfast was very average, but the kitchen space was lovely, as was the huge outdoor patio seating area. It was a pleasure to have a lazy cup of coffee there and read the paper before heading out – and you could tell the other guests thought so, too.

In short, we would definitely stay here again and you  might not be able to get a better value for your money in the area. Granted, their room rates will probably be higher in summer (we visited in the off season), but we’d rather spend our extra cash on restaurants and wine tastings, while still sleeping in a very comfy bed.

Nic, Rob, The Chicago Skyline and The Bean
On a recent trip to Chicago, Rob and I snapped…