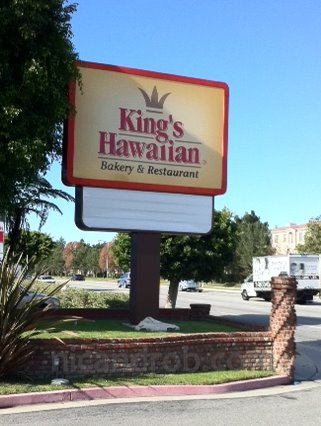 Rob and I are huge fans of Hawaiian food, but it’s something that you don’t often find outside of Hawaii. Oh sure, you’ll find hints of tropical flavor here and there, but it’s not the same as walking into a Hawaiian diner that serves loco moco, spam musubi and other island classics all on one menu. Hawaiian food is actually quite popular her in Southern California and one place we always wanted to try was King’s Hawaiian restaurant. You’ll probably recognize the King’s Hawaiian name from those delicious sweet rolls stocked in grocery stores nation wide. They are produced right here in Southern California and the company has two restaurants that sell Hawaiian food, as well. The smaller location is a cafeteria type setup that is adjacent to their actual factory. The larger is King’s Hawaiian Restaurant in Torrance, California.

Walking into King’s Hawaiian is a lot like stepping into the lobby of a classic resort hotel in the islands. There is a ton of atmosphere in the restaurant thanks to Hawaiian-inspired decorations that include a giant pineapple right in the middle of the restaurant. It sounds a little cheesy, but it works. The menu is straight Hawaiian and we wanted to order a few of our favorite things to try them out. We arrived for a late breakfast and were able to see both the breakfast and lunch menus.

We brought my cousin along so we would be able to justify trying more dishes, and we started with the King’s Breakfast Burrito. This was one of the highlights of the meal, stuffed with scrambled eggs, fried rice, Portuguese sausage and cheddar cheese in a flour tortilla and served with guacamole and salsa. The Portuguese sausage was delicious and it was one of the best breakfast burritos I’ve tried in some time. Everything comes with sweet Hawaiian rolls, too. 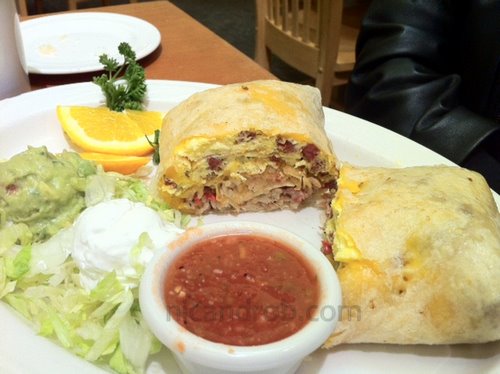 Our next two dishes came off the lunch menu: Spam Musubi and a Kalua Pork plate lunch. Spam musubi is another local Hawaiian favorite. It consists of pieces of spam (lightly fried), wrapped in rice and seaweed like a sushi roll. This one was served with a dipping sauce and some very spicy – and very good – wasabi mustard. The plate lunch was a good value and the smoky kahlua pork was very tender. It came with rice and macaroni salad. 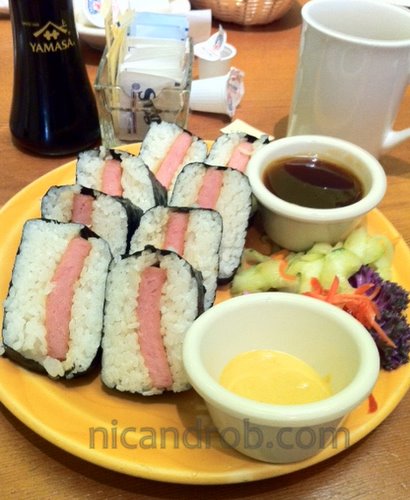 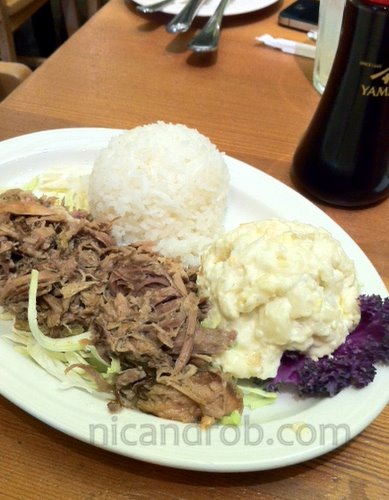 Last but not least, we couldn’t pass up the Loco Moco. This is one of my favorite local Hawaii breakfast foods. It consists of a pile of rice topped with a hamburger patty, fried eggs and lots of brown gravy. It is meaty and savory, and while it can be very filling, it is also very satisfying. My burger patty was a bit overdone, but the flavor was great and it really was a great way to start the day. Next time, however, I think I’ll start the day with their famous French Toast topped with coconut syrup. Not only does it sound good, but I think that almost every other diner in the busy restaurant ordered it! 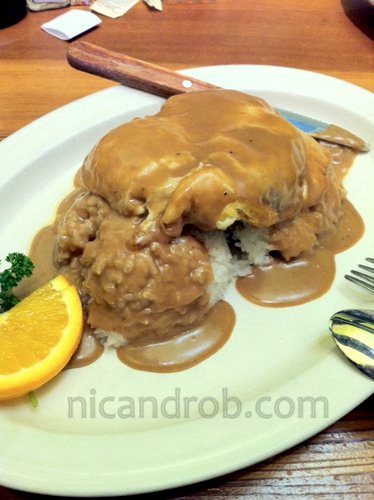 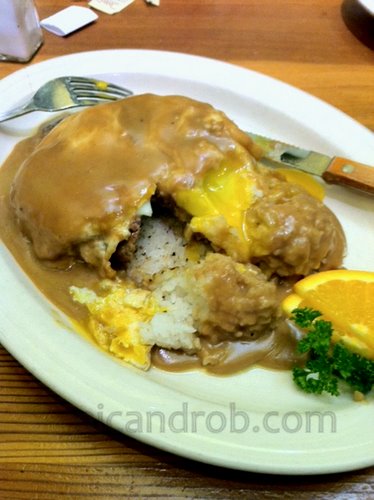