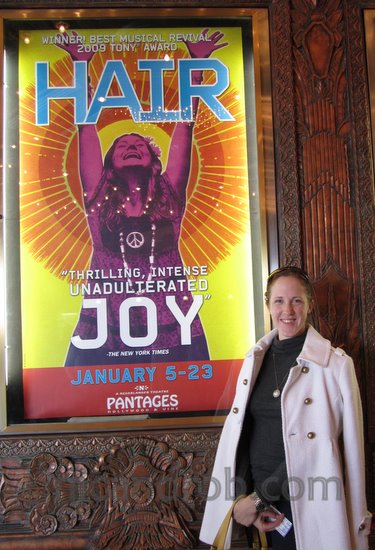 When we heard that the musical Hair was coming to the Pantages, we knew that we wanted to get tickets. We love going to see all kinds of shows, but Hair is one that we had never seen in theaters before, although we had both seen the movie. Through a deal I spotted at Travelzoo, we were able to get a great price on orchestra seats on opening night, which made the whole experience that much more satisfying.

Hair, the musical, debuted in October 1967. The story centers around a group of long-haired hippie youths who celebrate the sexual revolution, do illicit drugs and protest the Vietnam war. It’s a rock musical, with a great emphasis on the music, but it’s political themes have brought it to the spotlight again and again – both during its debut run and now.

We don’t want to offically call this a review the show, as we’re not theater critics by a long shot, but we thought the production was amazing. The cast was fantastic – great dancing, great acting and particularly outstanding vocals. From Berger and Claude to every member of the supporting cast, each was better than the next. They got a standing ovation at the end of the show and it was well-deserved. The run in LA is short, but we would recommend it to just about anyone (the nudity and drug use might not make it suitable for young children, fyi).

Now, you’re not technically allowed to take photos inside of the theater, but when the cast invited people to come up onstage for the “Be-In” encore after taking their bows, all bets were off. People ran up the aisles en masse – kids, adults, adults wearing the same outfits they wore when Hair was first released – to join the cast onstage, dancing, singing, and generally having a great time. I spotted several other people taking quick photos (and one guy taking video) of the crowd, too. Can you blame them? It’s not everyday that you get to go up onstage at the Pantages – especially with the cast of Hair after seeing such a wonderful production of the show. 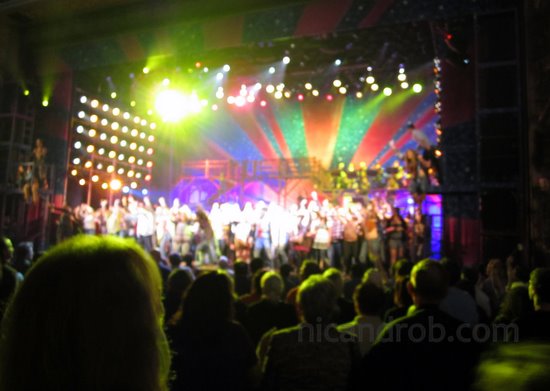 Sanrio Small Gift Tour, Los Angeles
When we got an e-mail notifying us that the Sanrio…