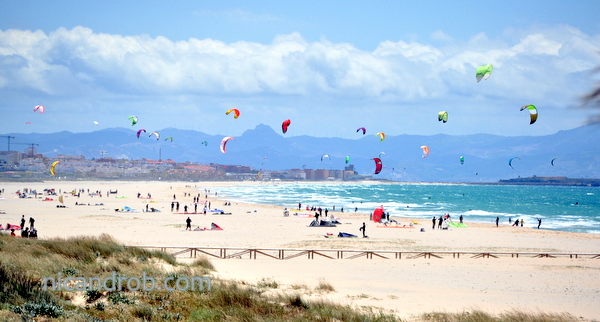 Our hotel in Tarifa, Hotel Dos Mares, had the most comfortable bedding by far or any hotel we stayed in in Spain, and despite the fact that we were still stuck with two twin beds pushed together to make one larger bed, sleeping in was a luxury – especially after our day in Tangier. After a lazy couple of hours, we finally started to get our things together, taking a break to indulge in some bread and Nutella that we picked up at the grocery store the night before for breakfast. We wanted to pack up, then go enjoy the beach, watch some kite surfers and take a horseback ride.

The hotel was immediately adjacent to Aventura Ecuestre, a riding stable that was right on the beach. Since I didn’t have time to squeeze in a ride after getting back from Tangier, I walked over to put my name down for a beach rider late in the morning. They were running a little behind and couldn’t put me down until 1, but we were in no hurry to leave. We spent some time watching the kite surfers setting up their equipment in front of the hotel and walked around taking pictures before I went on the ride.

Rob as armed with the camera and got shots of my on my horse before we went out. The ride was advertised as a beach ride, and I expected that we would ride on the beach the whole time. It turned out that we rode through a wooded area to a big, flat beach where we got to canter around for a bit. It was a fun ride overall, a lot more relaxed than some trail rides I’ve taken – and with nicer horses, too. When we got back, I found out that Rob had been waiting on the beach near the barn the whole time so that he could get a picture of me riding on the beach! Unfortunately the trail the guide led us down didn’t cross in front of the barn at any point. It was so sweet of him to try and get that photo. 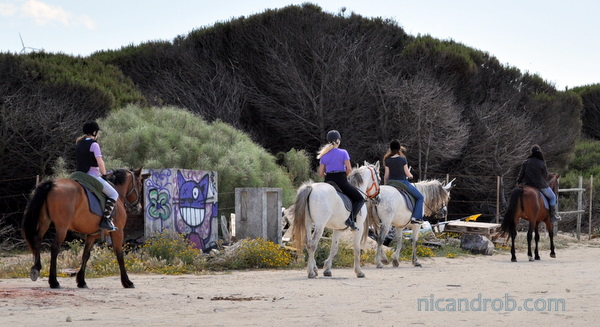 After the ride, we went back to the hotel bar for a coffee before heading out. Originally, we thought about stopping in Cadiz or Jerez de la Frontera on the way to Seville, but weren’t sure we would have time to do either city justice in just a couple of hours. I punched in the coordinates for the hotel in Seville and we were off.

It turned out that Jerez de la Frontera is right on the way. It is the home to one of the biggest horse festivals in Spain and one of the most famous riding schools, the Real Escuela de Arte Ecuestre. They perform several shows a week and you can even stop in to watch the daily training. I noticed that none of our guidebooks mentioned the weekend hours for the school – in fact, they didn’t mention the weekends at all. We decided to swing by on the off chance that they were open on a Saturday.

It turns out that they weren’t. In fact, almost nothing in Jerez was open at all. We only saw a couple of people in the city as we drove through. That is, we only saw a couple until we got to the huge Carrefore/shopping mall complex at the edge of town, which was completely packed. As it was the only thing open, we stopped into the very crowded McDonalds for a burger, then spent a few minutes walking around the mall. I can safely say that almost everyone in that mall was in McDonalds because the shops were deserted. There were a few people in Carrefore, which reminded us eerily of Walmart. We didn’t stay too long and were soon back on the road to Seville.

We both immediately liked the look of Seville. With beautiful architecture and lots of people walking around the streets, it just had a great vibe to it. Our hotel, Hotel Adriano, had a good location, about one block away from the cathedral and Avienda de la Constitution. Although Seville certainly has many major sights to see, we decided to take in more of the local culture than just rush to the tourist hot spots. Our decision was partially motivated by the fact that many shops on the main shopping streets were open even though it was a Saturday afternoon, and we knew that most of them would be closed on Sunday. 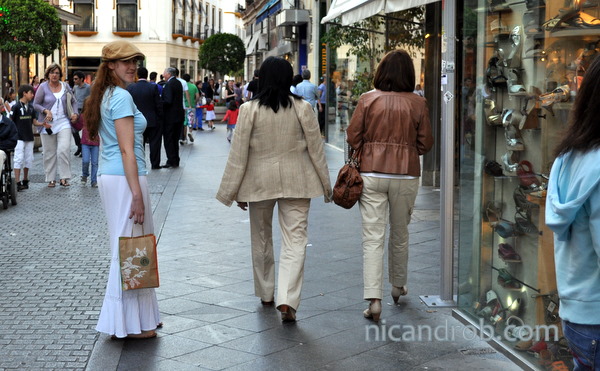 Clearly, everyone else had the same idea because the streets were packed! We stopped in to H&M, El Corte Ingles and a number of other stores before strolling back to a Starbucks across the street from the cathedral to get a cold drink and cool off. Although it was cold and raining at the beginning of the trip, it was downright hot in Seville, even in the very late evening! 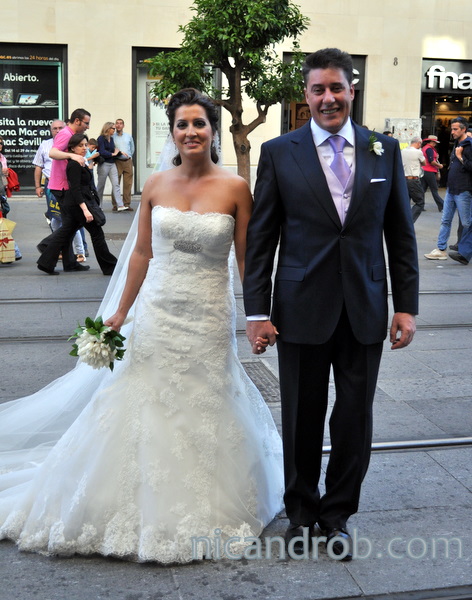 Along our walk, we saw a couple who were about to get married taking pictures with Seville street scenes in the background (we actually saw this couple and the wedding party later, after the ceremony, too), plenty of street performers and what seemed like dozens of horse carriages. We also spent some time watching the cable car that runs about 1/2 mile up and down the Avienda de la Constitution, which was always packed even though it went such a short distance. 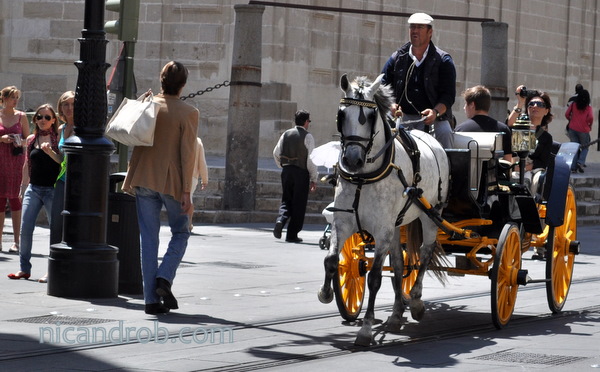 We finally went back to the room to clean up, then headed back out to find a place for dinner. Although Seville is supposedly where tapas started, we were in the mood for something a little heartier and set out to look for a restaurant rather than a bar. As we walked, I took some night shots of Seville after dark. 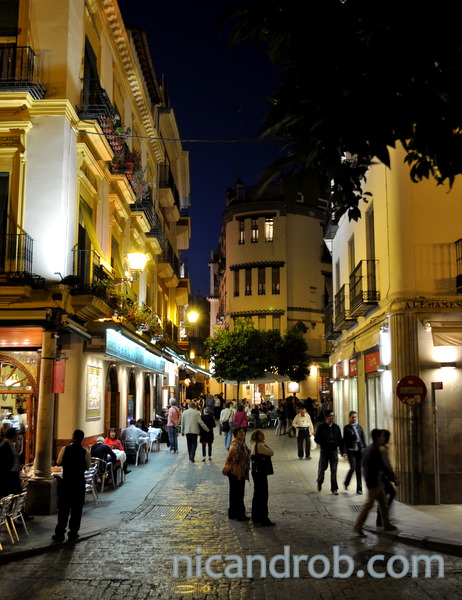 At about 11 pm (peak of dinner hour in Spain), we came across an interesting looking restaurant that had a line out the door. It turned out to be Restaurant San Marco, a popular Italian restaurant that is located in a former Moorish bath house. The architecture is gorgeous and the restaurant not only appeared in all of our reference guidebooks, but was recommended to us by an American couple we met back in Granada. So, we decided to get in line and give it a try. What a disappointment. Although the food was Italian, I’ve had more flavorful frozen pizzas with better crusts, and Rob’s pasta was bland and cheap-tasting. The grilled vegetable appetizer wasn’t involved – olive oil and veggies – but with some salt it definitely was the best dish we had. We were not even tempted to get dessert. I was surprised that the restaurant was so bad with so many good reviews, but I guess sometimes you ever know until you give them a try for yourself.

There were still lots of people out and about when we walked back to our hotel around 1:30 in the morning. 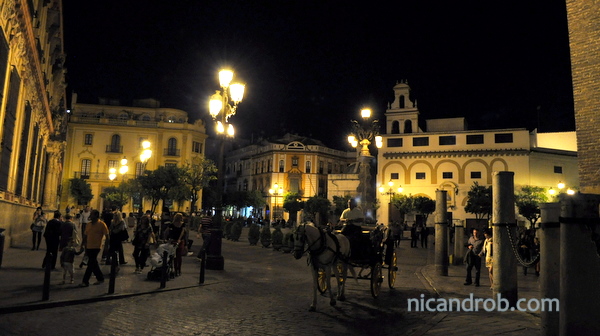