We really liked our hotel in Tarifa, Hotel Dos Mares, for a number of reasons. The bed was comfy, the location was great and we really liked the lounge – with an ocean front view – in the bar area where there was free Wifi. We seriously considered spending the whole day just vegetating there, but decided to take the ferry across the straight to Tangier, Morocco, for the afternoon.

FRS, the ferry company that runs the route from Tarifa to Tangier, offers their own package tours of Tangier. You can do anything from a few hours to a whole weekend. The 6-hour tour costs just as much as the round trip ferry ride, and since we didn’t want to venture into Tangier on our own, we decided to take the tour even though we knew it would be touristy. The tour was the easy option and we didn’t want to take the chance that we would regret not going when we were only 7 miles away in Tarifa.

We heard mixed things about Tangier. Rick Steves insisted that it was a great city and was no longer the “Tijuana of Africa” although it had been for years. Others told us that it was indeed the TJ of Africa. A lovely woman from Marakesh told us that she had never been to Tangier, although she lived in Morocco and did not intend to go there ever, if at all possible. Not exactly a glowing recommendation.

We drove into Tarifa from the hotel and picked up the tickets from an extremely nice woman at the FRS building, who also gave us some recommendations for free parking in town so we didn’t have to park in the pay lot at the ferry terminal. We parked and took a walk around the town to get some breakfast (it was noon) before getting onto the ferry. Rob was very concerned that we would get sick from eating the food in Tangier, but I was cautiously optimistic that we would be fine at a high-traffic tourist restaurant. Breakfast was at a very busy cafe and was very good (ham, eggs, toast, etc – of course!).

The ferry is very nice – clean and quick. We got a little seasick due to some rough surf, but we were still feeling good when we disembarked in Tangier.

If you are taking the tour, you wear little stickers so that your guide can recognize you when you get off the boat, and the guide herds you through an itinerary of touristy, scam-filled activities for several hours. We got into our designated van with a very nice group of about eight Norwegians. The van drove around the city, through the main business areas and up into the richest neighborhoods, where many foreigners live and the royal family has a summer palace. Many of the houses looked like they could have been in Los Angeles, but we saw very few people apart from landscapers and construction workers.

At the top of a hill overlooking the city, the van pulled over next to a man with a group of camels. It was 1 Euro to “ride” the camels – and by “ride” I mean that you sat on the camel while the camel wrangler led it in a 25 meter circle – and take pictures. It was still totally worth it for the photos for me, and I talked Rob into trying it, too. The camel tried to bite him in the leg just before his ride, but at least it didn’t spit on him.

After the camel ride, the van drove us into the old part of town and dropped us off near the main souk (market). We walked quickly through rather unsanitary looking food markets and I tried to snap a few photos of street scenes to get the flavor of the place. Our guide definitely knew every single person we encountered and had a real air of superiority to him that became a bit discomforting after a while. We had heard that the guides often get kickbacks from merchants that they force their tour groups to visit and it was a bit awkward seeing how many people were trying to curry this man’s favor.

Our next stop was a “traditional” Moroccan restaurant. I can easily say that I’ve had much better Moroccan food here in the US. Everything was overcooked and underspiced, and I don’t think that simply adding a sprinkle of ground cinnamon to chicken soup makes it Moroccan. The couscous wasn’t bad, but wasn’t stellar. We didn’t eat much and, apart from those who liked the chicken soup, we noticed that the Norwegians weren’t into the food either. The one standout of the meal was the hot mint tea. It tasted very refreshing and I loved the contrast of the huge quantity of mint with the sweet tea. 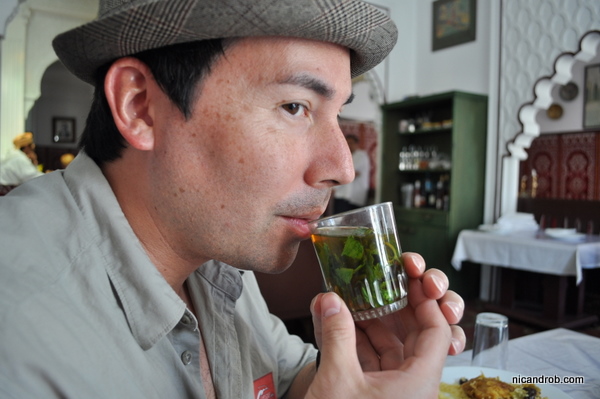 After lunch, we really got thrown to the wolves. We first went to a high pressure carpet manufacturing shop. I have no idea if they actually have several dozen women hand-knotting rugs in the back, as we were repeatedly informed, but we saw scores of rugs in all different shapes and sizes that were said to be made by them. The super-pushy propriator of the shop seemed to latch on to Rob and I, and followed us around the store pushing things into our arms and trying to convince me to convince Rob to buy things. Even if I wanted an expensive rug – which I didn’t – I would never have given this guy my credit card number or trusted him to ship it home for me.

Next, we went to an herb store, or, as the guide put it, a “traditional pharmacy.” The guys here had a very entertaining spiel where they showed off all kinds of spices (not that they put them on the food), remedies for everything from motion sickness to headaches, and other odds and ends. Unfortunately, they sold me some fake saffron – I never suspected that I should check the package before I left! – and I was pretty pissed off about the whole thing when I found out. Not that surprised, however.

From here, our guide threw us to the wolves and left us on a street surrounded by men hawking everything from fake Rolexes to rusty, wood-handled daggers. He sat to the side with his buddies (guys from the carpet store, as it turned out) and had a cup of tea while watching. The Norwegians  bought some fake Rolexes and knockoff sunglasses. I tried to buy some wooden camels as souveniers and – after rejecting too many incredibly cheap ones in favor of decently carved and finished camels – managed to piss off the shopkeeper enough that he wouldn’t sell me any. His loss, as they were way overpriced and he still would have made money with what I was offering. Rob and I overpaid for a cheap dagger from a street vendor right in front of his shop, partly for spite and partly for another photo op. I tend to think that if you’re in the business of haggling, you shouldn’t get too angry when someone tries to actually negotiate a price with you. The street guy certainly had no problem bargaining with us for about 15 fun-filled minutes! 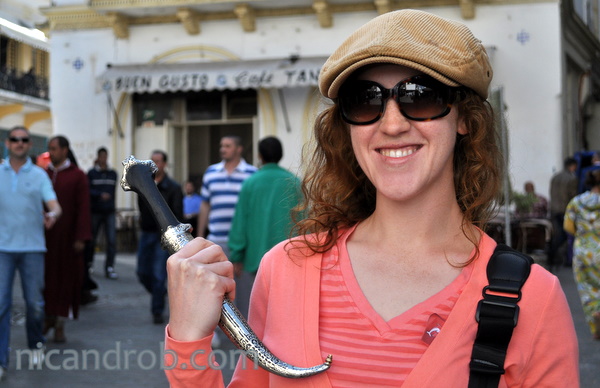 In the end, we headed back to the ferry and spent our last half hour in Morocco buying snacks at the duty free. It was an experience, to be sure. We were both glad that we did the tour because, although we didn’t like it that much, we probably wouldn’t have fared too well on our own in Tangier. We will definitely plan another trip back to Morocco, but Tangier will definitely not be on our repeat visit list.

When we got back to Tarifa, we headed back to the hotel to clean up and at dinner in the hotel restaurant. We spent the rest of the evening lounging in the bar area, enjoying whipped cream-topped cappuccinos and the ocean view before turning in for the night.

Ad Hoc, Yountville, California
On our trip to Napa, I made reservations for Rob…

The Bun Truck, Los Angeles, California
Los Angeles is teeming with food trucks, and we have…
There is 1 comment for this article