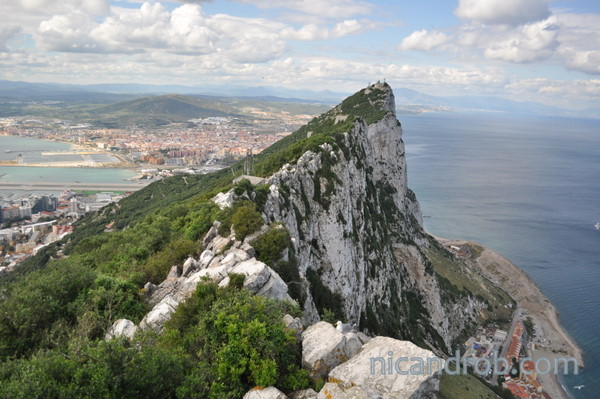 We packed up our things from the Parador in Ronda early in the morning, mapped out the coordinates for what we thought was the nearest parking lot to the Gibraltar border crossing, and checked out. We left everything in the car and decided to go for a walk around the town before leaving Ronda.

Unlike yesterday, Ronda was packed with tourists, even at 10 am. I have no idea where these people came from, since we didn’t catch so much as a glimpse of this many before. We wound our way through camera packing tourists (not unlike ourselves!) watching the town open up. Rob wasn’t feeling great after a very so-so breakfast at the Parador and I was feeling a bit down after having technical difficulties with Baking Bites,  so we kept an eye out for something to make us feel better. We settled on a Sprite-like soda for Rob and a scoop of “hecho a mano” ice cream for me. The ice cream was fantastic, but it turns out that while it was handmade, it was handmade by French people in France  and shipped to Barcelona before arriving in Ronda, not made at the shop I bought it from.

It was about 1pm before we finished wandering the town and we headed back towards the Paraor to pick up the car. We stopped to chat with a local artist – relocated from Scotland three years before looking for a more laid-back environment – selling some avant-guard paintings of Ronda in the main square. He recommended a particular route down to Gibraltar where he said we would definitely be able to see some storks on electrical poles. 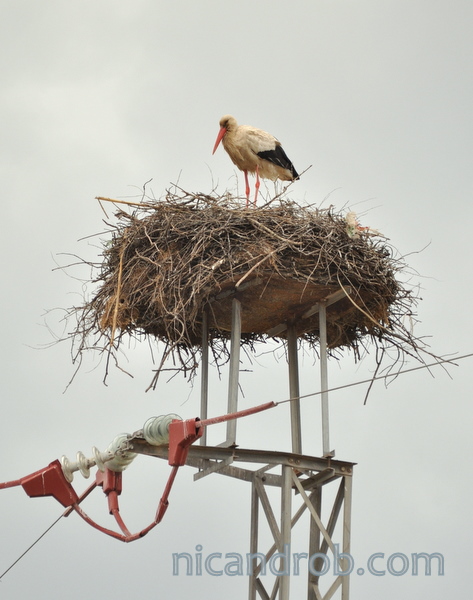 We thanked him for a nice chat and were soon on our way. We drove through many miles of winding road, through numerous white hill towns, until we reached the stretch that our artist friend had mentioned. He was not kidding. Every single electrical pole as far as the eye could see was topped with a gigantic nest, each with a stork inside! At the time, I actually thought he meant that there were stork statues on these poles, but it turned out that they were 100% real. It was amazing to see, and of course we stopped for some photos before continuing on.

Gibraltar turned out to be very easy to navigate in spite of the warnings in our guidebooks. Parking was easy at the Focona Parking Lot and seemed secure, with cameras and guards, so we didn’t worry too much about leaving the car there with all our luggage (we did take the netbook in our backpack just in case). Again, this was in spite of the warnings in the guidebooks. It was a 5 minute walk to the border from there. 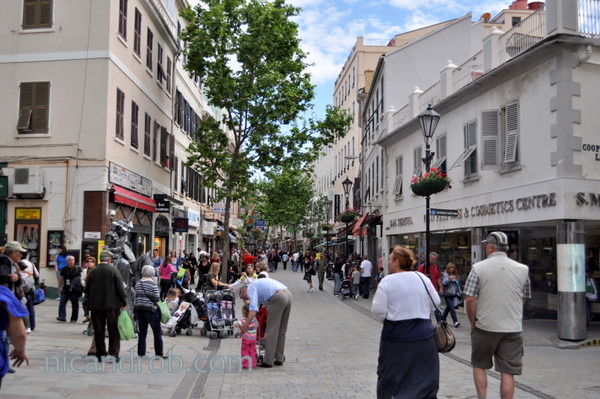 Crossing the border is a snap. Just join the fast moving trail of people – most of whom are going to the first shop on the other side of the line to buy massive quantities of tax-free cigarettes and booze – and walk through immigration. They really just glance at your passport. If you want yours stamped (we did), you need to ask the immigration officers. Once you’re in, continue walking across the Gibraltar airport (you walk straight across the runway!) and it’s about 15 more minutes into the town and the main shopping area.

We weren’t overly impressed with Gibraltar town on our first impression because nondescript high-rise apartment buildings and the throngs of people carrying cases of cigarettes are never really that big of a draw for us. That being said, we do like tax-free shopping and it would be worth coming back to Gibraltar just for that. The town became cuter as we walked through it towards the cable car. From the start of town, it is about a 20-25 minute walk to the cable car. You could take a cab or a bus, but the walk is nice when it’s not too hot and shopping while you take your time is fun, too. For us, what it boils down to is that we like to walk when we’re traveling to get as clear a picture about the places were’ visiting as possible. 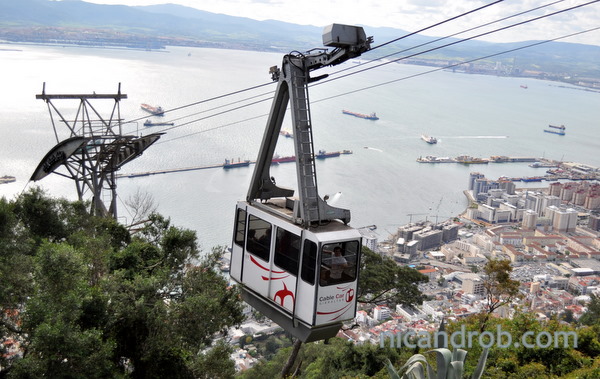 The Rick Steve’s guidebook we had turned out to be way off base on the closing time for the cable car, so we rushed needlessly through all the shopping – only stopping a couple of times to admire some watches – and arrived with more than two hours before the last cable car went up the rock. We were the only ones in the car for about five minutes and then, moments before it was set to take off, a group of about 20 elementry school age kids piled in. I was pretty worried that some of the more rambunctious ones would rock the car on its very steep ascent (as young boys have been known to do), but fortunately the ride was uneventful.

The kids got very excited when we reached the top, however, and as soon as they spotted an ape, they lured him close with a sack lunch and began playing keep away by throwing it back and forth over his head. This is not a good strategy when dealing with an animal that is almost your size and probably ten times stronger (at least!) than you are. Fortunately, the kids had bad aim and soon dropped the bag, which the monkey seized and made off with as fast as he could. One of the two school chaperones reappeared at this point and started yelling at the kids. We took a couple of photos of the rock and headed off to look for some more apes in a less crowded area of the viewing deck.

It didn’t take long for us to find a group of apes. It seemed that most of the apes – and therefore most of the tourists – congregated about halfway down the mountain. That was lucky for us because it meant that we were the only people near our group of about 8 apes. There were three babies and five adults. They were all cute, and it was incredibly entertaining to watch the babies fighting and leaping around.

Our favorite was a baby ape about the size of a football. He picked up a cigarette and carefully examined it to see if it was edible. He decided it wasn’t, flung it away… and decided that this new rolling toy was perhaps the coolest thing he had ever seen! He chased it, slapped it and rolled it all over the hill until he finally lost interest. Very cute!

It was also cute watching an ape figure out how to open a packet of cookies that he had presumably taken from another traveler (possibly the kid’s stolen lunch), wrestling with the wrapper then delicately munching through a pair of tasty looking cookies. I was surprised that none of the other apes tried to take some of the cookies for themselves, although one did go over and pry the cookie-eater’s mouth open to look for crumbs once he had finished. 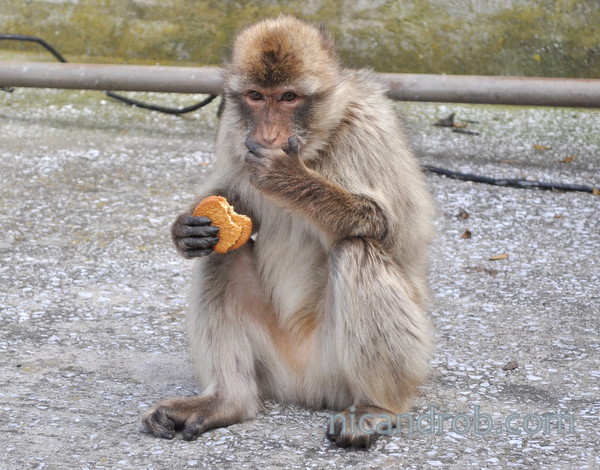 We headed back down the mountain in the cable car and headed back to town for a dinner of British pub food. Most of the stores were closed by 8pm, so there was no shopping to be done on the 20 minute walk back to the main square. It was easy to find a decent restaurant: we simply looked for the most crowded place and ate there. It was great to have bangers and mash, and steak and guinness pie for dinner. Very tasty and very unlike Spanish food. Very nice change of pace for this vacation.

We headed towards Tarifa after dinner to check into our next hotel and get some rest. 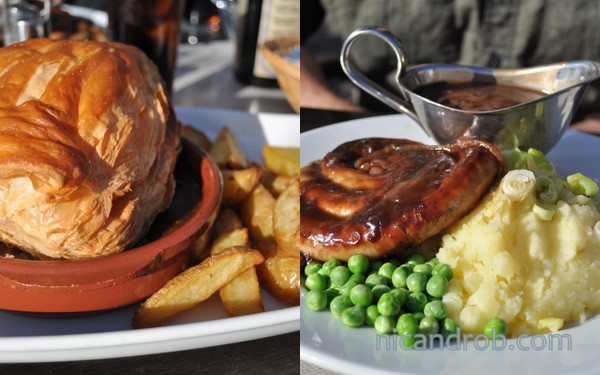 Wordless Wednesday: Stonehenge
This picture was taken before Rob and I met -…

Kenya Safari, Day 1
We left Nairobi (thankfully) right after breakfast. Breakfast was a…

Sanrio Small Gift Tour, Los Angeles
When we got an e-mail notifying us that the Sanrio…