The plan for our fourth day in Spain was simple. We were going back to the airport to pick up our rental car and we were going to drive the 400 km down to Granada. The reason we decided to pick up our rental car was twofold. First, neither of us relished the idea of trying to drive in a busy city like Madrid. Second, it was much cheaper. We boarded the metro a couple of blocks from our Madrid hotel and headed towards the airport. It was incredibly easy to take the metro into the terminal and I’d travel that way into town in a heartbeat, even though the shuttle on our first day was convenient and not very expensive.

Finding the rental car location was a challenge. Again, in an effort to save some money, I booked through a local car company and not a big name like Hertz or Enterprise. Companies like that have English-speaking representatives behind colorful counters at airports across the world. Local companies have reps that meet you an ambiguous spots, without signs, in airport terminals and may or may not speak English. Let’s just say that took us a while to find the representative and it was a good thing that the car contract was in English. But at half the price of a big name company (and good reviews online, of course) it was worth the extra hassle.

The woman took us out to the airport parking lot and showed us the car, a Nissan Micra. It was a super economy car that got great gas mileage and was not a bad choice for two people and some luggage wanting to drive around Spain. Plus, the company I booked the car through included insurance and all damage on the car would be covered – a huge plus when you’ve seen how European drivers like to park (especially in big cities where they really put those bumpers to good use!). 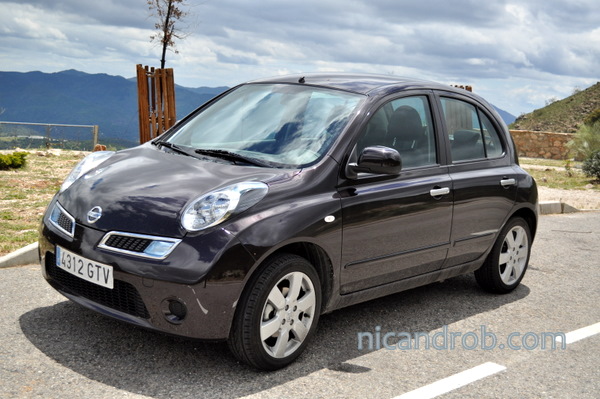 She indicated that when we returned the car, we should park it in roughly the same spot in the airport parking lot and slip the car key and parking ticket through a cracked window and leave it there for a company rep to retrieve. I have never seen a system quite like this before, but it probably cut down on manpower. She handed us the prepaid airport parking lot ticket, the GPS and left.

All this would have been fine if not for the fact that there is a very short time limit on the airport parking tickets at MAD and our ticket had expired by the time we tried to exit the lot. As if that weren’t bad enough, the ticket managed to get wrinkled irreparably by the ticket machine, so we couldn’t even pay for the extra overage time easily. Long story short, it took about an extra 40 minutes to get everything sorted and get out of the car park.

We were a little frustrated by the time we hit the road, but Spanish highways are excellently maintained and easy to navigate and we soon were enjoying a smooth and rainy drive through Spain. One thing we noticed is that Spain looks a heck of a lot like California. Similar climates, similar landscapes. It was pretty, but a bit uncanny.

There aren’t a lot of fast food restaurants at rest stops in Spain. There are small, locally owned restaurants and big service stations with small restaurants attached. As we hadn’t had breakfast, we were starting to get really hungry after we had been driving for about a hour. This was a little bit of a problem because most restaurants don’t open for lunch until after noon. When you know that nothing is open, it makes you even hungrier. We kept on driving until we spotted a local restaurant just off the highway that was putting out a sign for their lunch specials. We pulled over and walked in.

Not only were we the first people in for lunch – the restaurant was on the second story of the building while there was a bar on the first floor – but I would wager that not too many non-Spanish people stop in judging from the way that the bar patrons stared at us. Fortunately, the staff of the family owned restaurant was fantastically nice and the food was great. Eggs, potatoes, ham and a couple of cokes later and we were refueled and ready to keep going.

The rest of the drive was beautiful, with off and on rain and some pretty spectacular clouds. We spotted some of the Don Quixote windmills, but didn’t stop due to the weather. On of our favorite things to catch sight of was a huge roadside bull. These billboard-like bulls appear every few miles as a sort of mascot to Spanish-ness. Almost everyone I showed the photo to after we returned home thought that it was a real bull in that photo, too.

We stopped at a service station for a quick rest and snack. Rob took a brief nap in the car while I read the guidebook a bit. I happened to look up just in time to see a shepard herding a flock of sheep right in front of me! The sheep seemed to know the way, but they definitely appeared to come out of nowhere and I was surprised that such a big flock was able to sneak up on me. 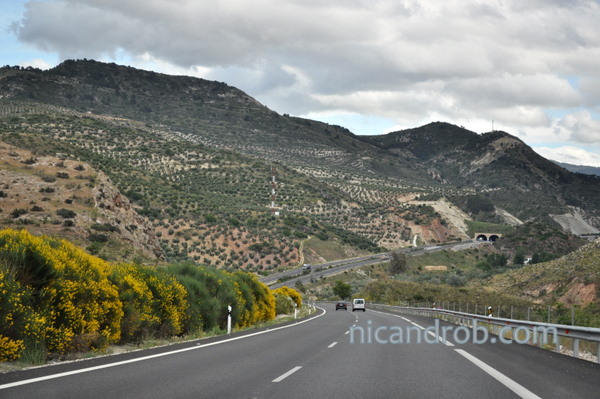 It was a relief when the GPS told us that we were finally arriving in Granada. We followed the directions carefully, got off the freeway, made a few turns… and ended up in a very narrow alleyway that gave us maybe 6 inches of clearance on either side of our tiny car and was filled with pedestrians. It was probably one of the most terrifying driving experiences we had ever had because there was literally no where for us to go. And did I mention that the tall, old, stone buildings cut the service to the GPS so it couldn’t have told us where the heck we were anyway?

I don’t know if I was more worried that we would hit a pedestrian, be stopped by the cops for turning onto a street where cars weren’t allowed to be or that we would simply be completely stuck.

Eventually, we did find another alley that led off of our alley and onto a major street. The street was completely jammed with rush hour traffic, but that gave me time to start up the GPS, which clearly tried to direct us bac to the alley we had just come from. Our hotel was supposed to be near the Alhambra and I knew that there was no way that alley led anywhere near the palace. I reset the GPS for the palace and figured that we could ask someone when we got there.

Unfortunately, it turned out that there was an awful lot of road construction going on in downtown Granada. Streets were completely closed off. Alternate routes were around every other corner. Cars were being redirected down normally one-way (normally the OTHER way) streets. It was organized chaos and I was, frankly, surprised that the GPS didn’t simply short out on us like a cartoon gadget after it repeatedly shouted at us that we were going the wrong way. As soon as we saw a sign for the Alhabmra, I turned off the GPS and we decided to wing it. We cut across a few one way streets, took a bus and taxi only lane for a couple of kilometers and finally arrived at the Alhambra.

We flagged down a taxi driver to ask if he knew where the hotel was. He turned and pointed over his shoulder: the hotel was about 50 meters from where we were standing, directly across the street from the Alhambra. We checked into the beautiful Guadalupe Hotel shortly before it started to storm. We hurried to the convenience store next door and stocked up on snacks, as neither of us were that hungry after a day of on-again-off-again snacking during the road trip, and sipped hot coffees in the hotel lounge and enjoyed the free WiFi before turning in for the night. 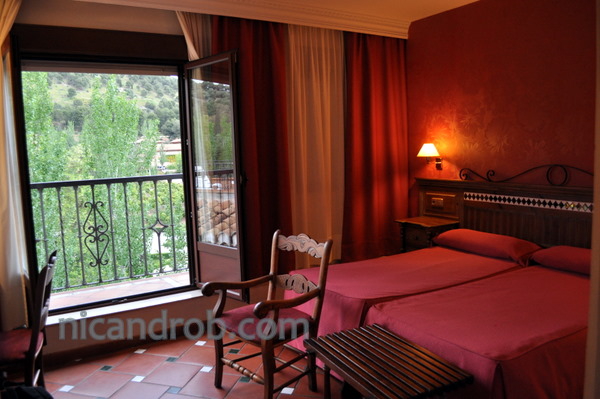 Spain and Andalucia, Day 10: Seville and Osuna
On Sunday, we had a big day planned. We had…