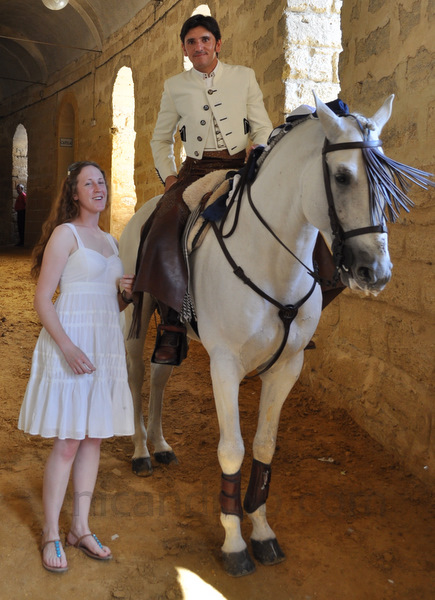 On Sunday, we had a big day planned. We had tickets to a corrida de rejones in a town called Osuna, about 80km outside of Seville. A corrida de rejones is a bullfight done from horseback, mostly using extremely athletic Lusitano horses. I was interested in seeing this event live after seeing a YouTube video of a particularly impressive horse called Merlin, ridden by rejoneo Pablo Hermoso de Mendoza. When I found out that he was going to be one of the rejones at this bullfight, that sealed the deal for me. I knew that I probably wouldn’t have a chance to attend an event like this one again and, if you’re going to see it, you should see it done at the highest level possible by the most skilled rejones.

We didn’t want to be late to the show and we weren’t entirely sure how long it would take us to get there, so we decided to spend a very leisurely morning in Seville, then head out to Osuna after lunch. Most of the stores were closed, so there were only a few things on our must-see list for the morning: check out the flea market and find some nun-baked cookies.

Fortunately for us, these two things happened to be in the same location! The nun baked cookies are exactly what they sound like: cookies baked by nuns. They’re sold in a small shop that is almost directly across the street from the main entrance to the cathedral. On Sundays, there is a small flea market packed with collectibles, from bullfighting posters to rare, old coins in the same courtyard. The crowd seemed a little bit older and a little bit more discerning, perhaps because the market was a lot smaller than some of the flea markets that we’ve been to before. The shop was called El Torno. 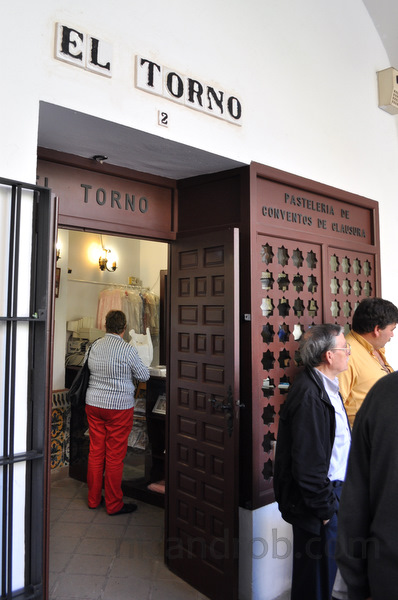 El Torno is located just across from the main entrance to the Cathedral in a small plaza off the main street. Although they’re baked by nuns, they’re not sold by nuns. The woman running the shop pointed out the most popular cookies, all of which are made with traditional Spanish recipes. I settled on some orange almond cookies stamped with the name of the nuns who baked them, Dominicas Santa Maria la Real. 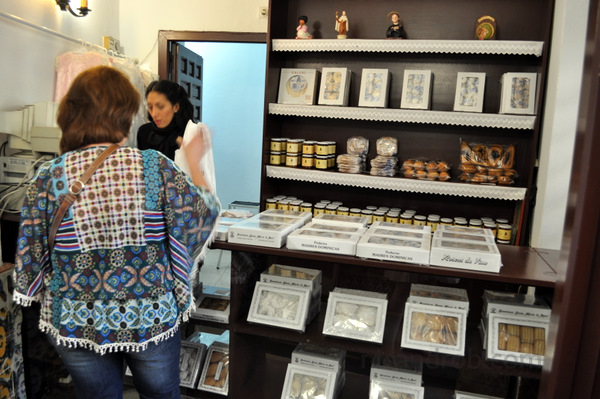 The flea market wasn’t nearly as impressive as the market in Madrid, which covers many city blocks with all its vendors and has goods of just about every shape and size that you could want, as well as a lot of touristic souvenirs. The market outside of El Torno was small and seemed to specialize in stamps, coins and small artworks. We didn’t spend too much time there, but instead took a long walk before heading back to the car and hitting the road for Osuna. 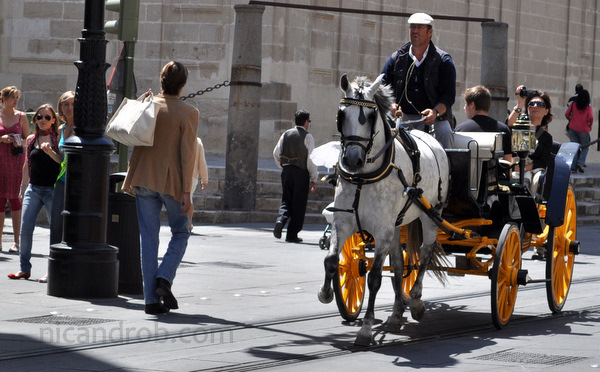 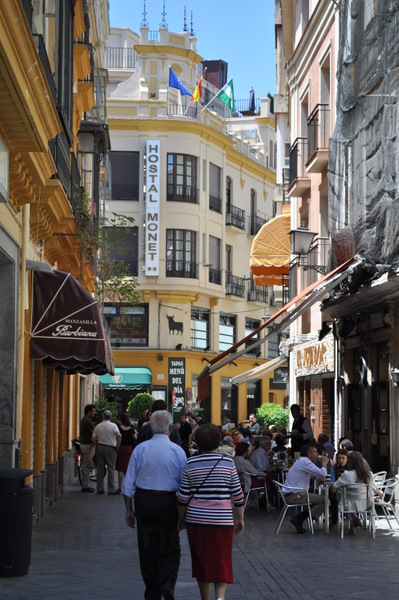 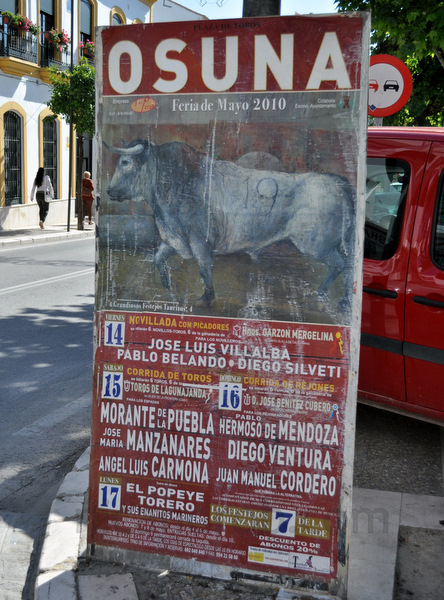 The drive to Osuna was an easy one, since the town is basically in the middle of nowhere and there is really only one road that goes to it. It was good that we left early, however, because the town was having a huge feria. Every single resident – as well as anyone who lived in the surrounding countryside – was in the center of town eating, dancing and celebrating. The event explained why they had gotten such high profile rejones to come to their bullfight; this was clearly the biggest event of the year in town. 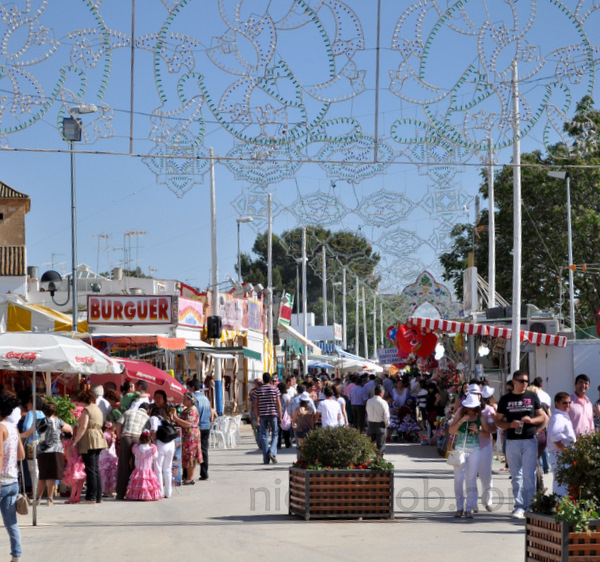 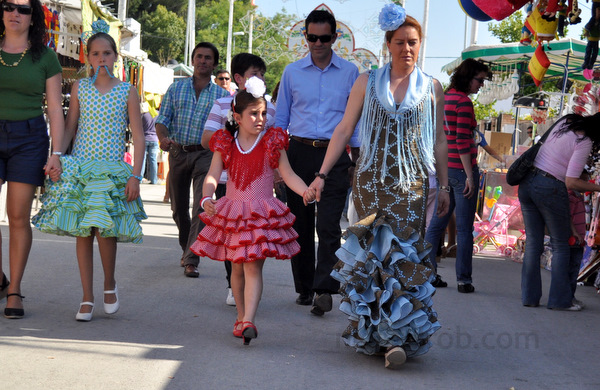 I bought my tickets online and didn’t know what to expect, since I knew a lot less about the bullring in Osuna than I did in Madrid. The arena was small in terms of seating capacity and there really were no bad seats. That said, we lucked out and our seats were in the front row. This gave us a great view of the action and allowed me plenty of space to play with my camera and get some good action shots. The rejones we saw were Pablo Hermoso de Mendoza, Diego Ventura and Javier Cortés. Now, I recognize that not everyone is going to want to see a bullfight in general BUT IF YOU ARE I highly recommend seeing a corrida de rejones. It was absolutely amazing to see the horses in action and every moment of the fights – and there were six in all – was as exciting as the video clips of Merlin posted in the YouTube video above. I could go on and on about how gorgeous the horses were, how exciting it was to see them in action and how much the crowd loved it. Instead, I’ll just share some photos of the event and say that I am definitely glad that I didn’t miss out on this opportunity. 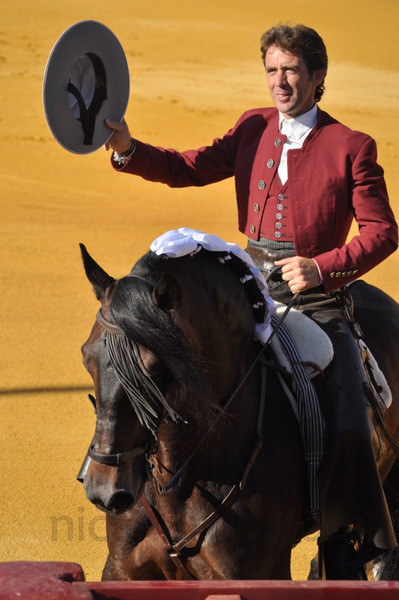 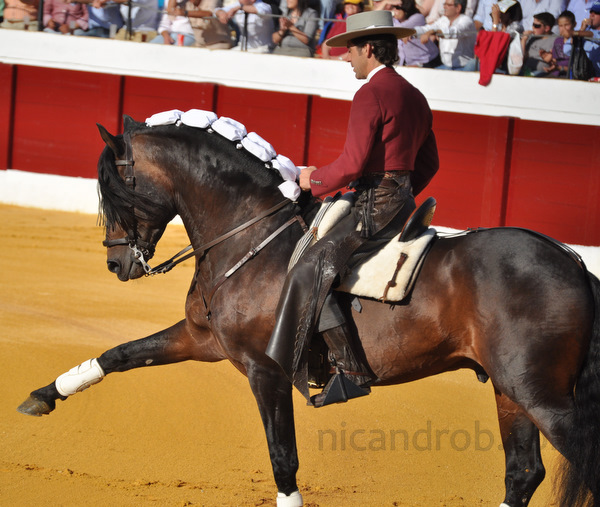 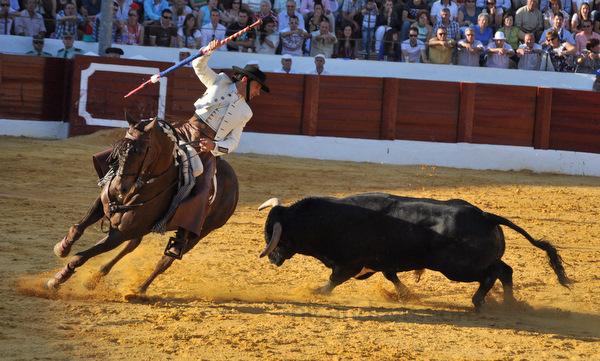 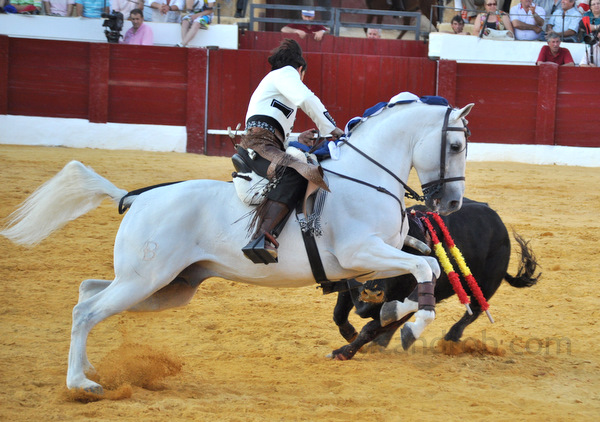 Getting back to the story, Osuna was so busy with their feria that it took us forever to find parking and we had to park on the very outskirts of town. By outskirts, I mean that if we looked over our shoulders there was nothing but a single road and lots of completely deserted countryside. When the bullfight was over, our remote parking spot meant that we were the only people who could actually get into our car and drive away without getting stuck in the worst traffic jam that Osuna had ever seen.

It was very late by the time we got back to Seville and we thought that we would have no trouble getting back to the hotel since there would be no traffic. Traffic means that there are lots of other cars to follow if you get lost, however. When you are in an extremely old city where the stone buildings block your GPS signal, no traffic means that you are going to get lost on tiny side streets. There was a moment when I thought that we would never find our way out of the maze we were caught in where all the streets were just inches wider than our vehicle. Eventually, a cab came by us and we followed it out to the main road and back to the hotel.

The Bun Truck, Los Angeles, California
Los Angeles is teeming with food trucks, and we have…