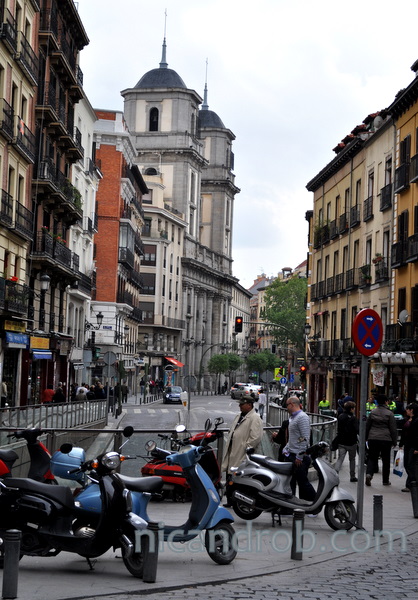 Our second day in Madrid got off to a slow start. As we were falling asleep the night before, I was having visions of all the fun things that we could squeeze in to the morning hours before getting to the main event of the day, a bullfight at Las Ventas. Jet lag, staying out until almost 2 am eating tapas and having no natural light in your hotel room is a recipe for getting up late. It was 2pm when we finally woke up and I was forced to rethink the plans for the day.

The first thing on our agenda was to get dressed and get out the door. The company that I bought our tickets from, Tickets Toros, has an office in Madrid where you can pick up your tickets on the day of the fight. The catch is that they’re only open until 4pm. This didn’t seem like a problem at first, but I got the name of the plaza that Tickets Toros was located in wrong, so it was 3pm when I realized that we had to be all the way across town in less than a hour. Normal people would probably have gotten a cab at this point, but we didn’t think it looked all that far on the map, so we set out on foot. 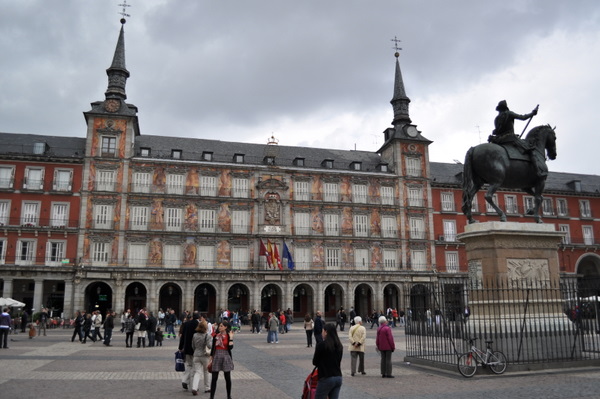 We saw the city in fast forward, speed walking through Plaza Major and Puerto del Sol and down the Gran Via, through tourist areas and business areas. When we finally got to the Plaza del Colon with about 15 minutes to spare, I had no idea where the actual office was, and since it was lunch time, very few people were out to help us with directions. Finally, I found someone to direct us towards the appropriate building and we were able to pick up the tickets. We were hot, sweaty and relieved to be all set. 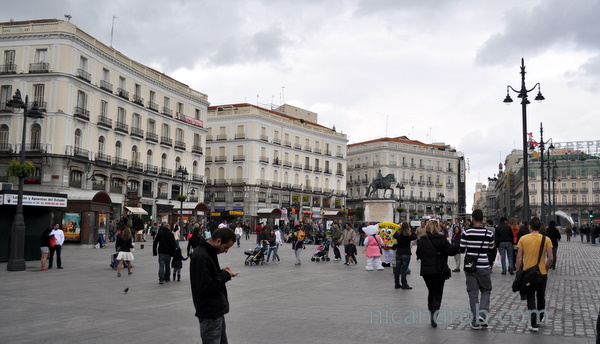 We turned and went back outside, unsure of what to do to pass the next 2 1/2 hours before the bullfight. We stopped into the tourist information center to get some maps and some recommendations on what to eat. The woman working there was nice and helpful, but wasn’t really able to make a solid recommendation for a nearby restaurant, although she did tell us where a Starbucks was so that I could get some coffee. We chatted about the rest of our plans for the trip and she seemed surprised that we were going to so many places. It turns out that, even though cities like Granada and Seville are only a 2 hour high speed train ride away, she had never traveled to any of them herself! Naturally, we tried to encourage her to get out there and see some new places herself before we left.

We had lunch at the Spanish equivalent of Subway, where they made a variety of hot sandwiches. Then, we sauntered across the street to Starbucks for a cup of coffee. We decided that the best course of action was simply to take the subway back to our hotel, get changed and then head to Las Ventas. The metro line that served our hotel actually ran directly to the bullring, which made it a very convenient jumping off point for us. 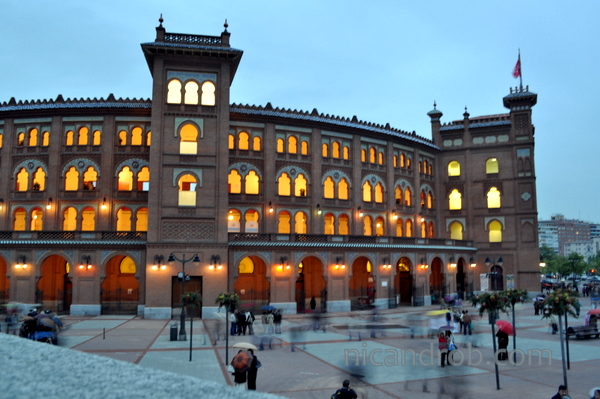 We debated whether to take the umbrella or not when we set out for the bullfight, and ended up taking it “just in case.” This turned out to be an excellent decision because it was raining when we got off the metro in front of the bullring! We quickly navigated through the crowds to get inside. The seats, however, are all uncovered. Las Ventas has Roman amphitheater-style seating, which means that every row in the stadium (which seats 20,000 or so) is essentially a giant step. You sit on one step and put your feet on the step below, just behind the back of the person sitting in front of you. I was worried that it would be cramped, but it was only mildly inconvenient when latecomers had to scramble over people to get to their seats as the bullfight started.

Our seats were great. We were sitting in the Sol/Sombre section about 8 rows up from the front. It was a great seat to photograph from and got us pretty close to the action. I would have had to take a wild guess on what the best photo spots in a bullring are, but fortunately I found a blog post that described exactly that and tried to take that into account when I chose the seats. You can read more about how to buy tickets to a bullfight, if you’re interested, here. 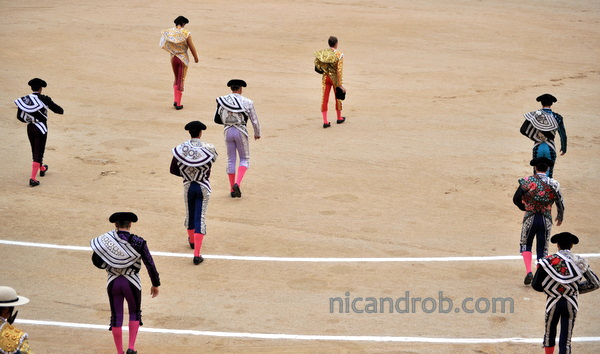 We read about bullfights before we came to Spain, but we really only had the gist of how the event worked. First, bear in mind that it is considered to be an art for more than a sport, and there is quite a bit of pagentry involved. It starts out with a huge parade of all of the participants. Each matador has a team of six assistants with him – two picadors on horseback, three banderilleros and a mozo de espada – in addition to the ringmaster, all kinds of pages and the team of people – and a trio of fancily harnessed donkeys – who clear the ring between each of the six corridas that make up the fight. 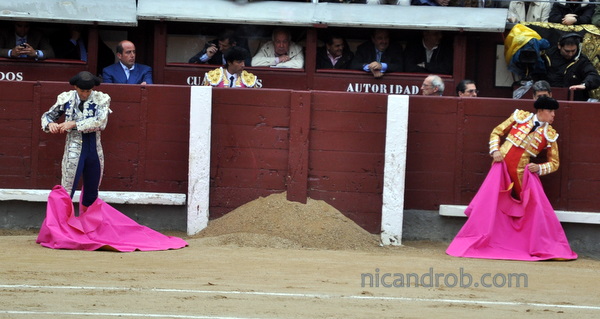 After the parade and the salutes to the president of the bullfight, the arena clears and the bull is released. The bulls used in bullfights are Spanish Fighting Bulls, a breed of bull that is unique to the Iberian peninsula and has been selectively bred over the years for aggression, stamina, energy and strength. They are very valuable, and the breeders names are prominently displayed at the start of each match. The bulls are not permitted to fight until they are at least 4 years old and have reached a weight of at least 1015 lbs for a top bullring, but the bulls can reach weights of more than 1500 lbs at full maturity. The biggest and best bulls go to the most famous bullrings in the country. The bulls are killed during the bullfights, but occasionally a particularly outstanding bull is pardoned and heads back to the ranch to breed more bullfighting bulls.

The bulls charge into the arena like an avalanche, more than a half ton of hurtling muscle. They head for anything that moves, and in this case it is men with big, pink and yellow capes. The first part of the fight is called the Tercio de Varas. The banderillas encourage the bull to charge at their capes and run, tiring the bull out and allowing the main matador to see how the bull reacts. After some moments, picadors enter the arena. Picadors are mounted on heavily armored, blindfolded horses. The bull is allowed to charge directly into the horse, at which time the picador stabs the bull in the shoulder blades twice with a lance before exiting the arena.

These lance wounds usually cause a fair amount of bleeding and serve to weaken the bull; it is mandatory part of the bullfight. We definitely could have done without the picadors entirely. Although no horses were injured, it was a bit nervewracking to see the bulls charge into them. It also would have presented even more of a challenge to the on-foot participants of the corrida. 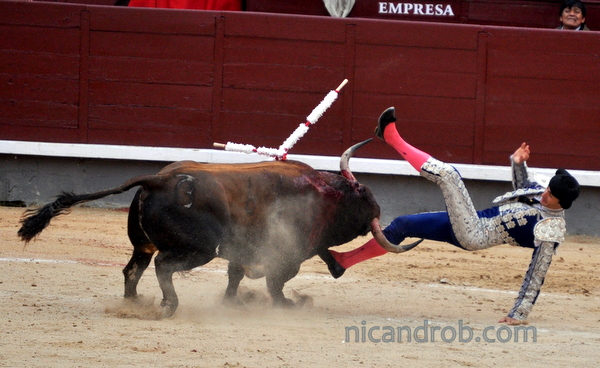 The next stage of the bullfight is the Tercio de Banderillas. During this stage, the banderillas swap their capes for decorative, barbed sticks (banderillas or “little flags”). They attempt to demonstrate their bravery by charging at the bull and sinking the small fish-hook tips of the sticks into the bull’s shoulders. This is a fairly risky part of the fight and we saw more than one banderilla flee from the bull – and one who was hooked in the leg and flipped over by the bull! He got as close to the ground as he could while other men used capes to lure the bull away, and he eventually rose unhurt. 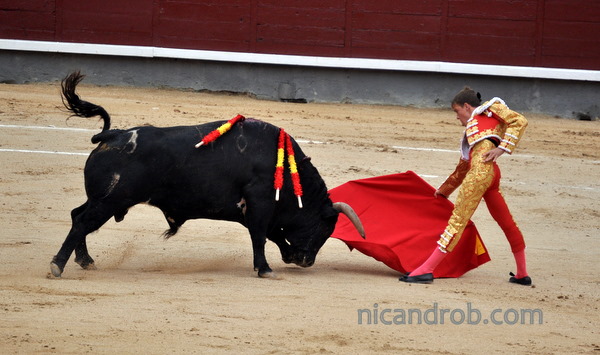 The final stage is the Tercio de Muerte. This is where the matador enters the ring with a muleta – a small red cape mounted on a stick – and draws the bull through a series of passes through it to demonstrate his skill at controlling the bull. The movements with the muleta are highly choreographed and each has its own name. If you’re new to bullfighting, it’s easy to tell which moves are considered to be the most difficult and/or impressive by which ones the crowd cheers most for. The bullfighter also has a sword, and at the end of the fight, the matador kills the bull with one stroke between the shoulder blades and straight through the heart.

Do not go to a bullfight unless it’s a good one (or you already know that you’re interested in the sport and want to see how it evolves from the lower levels top the upper ones) because fights are a lot more likely to go smoothly at the highest levels of the sport with the best bullfighters in the most famous arenas. May is the Festival of San Isidro in Madrid, where there are bullfights every night of the week with some of the best bullfighters in the world, and that is a great time to see bullfighting at its finest.

How did we like it? There were a lot of things that we liked, particularly the beginnings of the fight where the bulls were the most active. And as I said before, there were things we didn’t, like the role of the picadors. I loved the dramatic photos I got. Overall, it was a really interesting experience and something we’re glad we did have the chance to see. 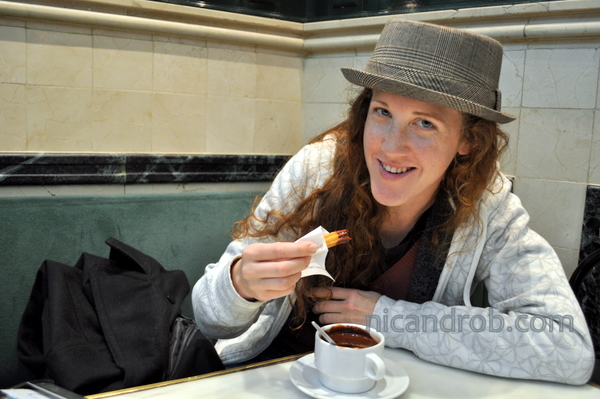 After the bullfight, we took the metro back to central Madrid and stopped by Chocolateria San Gines, a cafe where they serve up crisp churros with thick, decadent hot chocolate (churros con chocolate) 24 hours a day. The cafe is packed almost all time time, so just get in line and grab the first table that opens up. We snagged the communal confectioners’ sugar shaker to give our churros a little extra sweetness. You can read more about the Chocolateria at BakingBites and also get a recipe for making it at home!

We were pretty stuffed after the churros, but felt a little guilty about having eaten dessert before dinner and not having had much in the way of protein during the day. We looked for a welcoming tapas place on our walk back to the hotel and stopped in to a not-too-busy restaurant for a plate of ham, cheese and ham-wrapped broiled artichokes. It was just enough to really fill us up and just enough savoriness to cut the chocolate and churro richness before we went to bed.

Gravity 1020 at The Fort Collins Brewery, Fort Collins, CO
Visiting a brewery is a must-do when you're in Fort…

Tiki-No, North Hollywood, CA
Tiki bars are one of the most fun types of…
There is 1 comment for this article