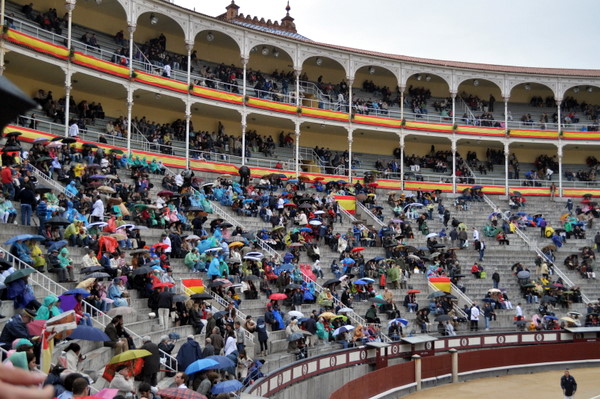 This is a question that Rob and I faced on a recent trip to Spain: how the heck do you buy tickets to a bullfight? Our guidebooks assured us that you could buy tickets for as little as 5 euros right in front of Las Ventas (the bullring in Madrid) a couple of hours before a fight. That might be true of some bullfights, but since our trip was going to take place during the San Isidro Festival – a huge bullfighting festival in May where fights are held daily instead of only on Sundays – and some of the best bullfighters in the country were slated to perform, I wanted to be sure that we got good seats.

Fortunately, you can buy tickets online and pick them up when you get to Spain. Tickets Toros sells tickets to fights in Madrid, Valencia, Seville and Malaga. You select the area of the stadium in which you want to sit, pay in advance and pick your tickets up the day of the fight. It is easy and hassle-free.

That said, you still need to know where to sit.

Seats in the bullring are priced based on proximity to the bullring and whether they’re in the sun or the shade. At Las Ventas in Madrid, there are multiple levels (tendidos) and you will need to choose high (alto) or low (bajo). Lower seats are more expensive but get you closer to the action. Smaller stadiums will only have one level. From here, the seats are either in the sun (sol), sun and shade (sol y sombre) or shade (sombre). The shaded seats are the most expensive because that tends to be where most of the action takes place – plus it’s a comfy place to sit in the summer heat. I think that sol y sombre gives you a better vantage point, especially if you want to try to take some photos of the fight.

Since you’re only likely to go to a bullfight once, I’d recommend getting decent seats to get a good view of the fight. Sol y sombre and tendido bajo will give you a reasonably priced tickets in a great location in any stadium.

Equally important to the bullfight experience is the caliber of the fight. Do not go to see some third rate bullfight. It can be ok at best and terribly depressing at worst. A bullfight in a well-known venue – such as Las Ventas or the bullring in Seville – is going to be a much better experience. A little bit of googling will also tell you what bullfighters are more popular/more famous at any given time and fights that feature them are likely to be better.

My final recommendation is to see a horseback bullfight (corrida de rejones) or a corrida mixta (mixed bullfight, with rejoneadors and matadors) if at all possible. They’re much more exciting to watch than your average bullfight, with more action and a much higher skill level called for.

To summarize, get good seats, see a quality fight and try to see a horseback bullfight if at all possible. You’ll get a great taste of the Spanish tradition of bullfighting and will have the best experience possible this way.

Gravity 1020 at The Fort Collins Brewery, Fort Collins, CO
Visiting a brewery is a must-do when you're in Fort…
There are 2 comments for this article